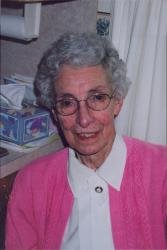 Blanche Olive Saunders, passed away on August 28, 2015, at Bobby’s Hospice. Born on November 17, 1925 she was a daughter of the late Lester and E. Reta (Wheaton) Perrin. Blanche was a member of the LOBA, Eastern Stars, ACW and Clarendon Ladies Club. Surviving are her children, Christopher (Dawn) Saunders, Clarendon; Diane Saunders (David Ingraham), Grand Bay-Westfield; Gregory Saunders, Enniskillen; and JoAnne (Donald) Harnish, Clarendon; 11 grandchildren; 17 great grandchildren; many nieces, nephews and cousins. Blanche was predeceased by her husband George; infant daughter, Lynn Joyce; brothers, Walter, Howard and Harry; sisters Mabel, Hazel and Cora. The family would like to thank the doctors, staff and volunteers at Bobby’s Hospice for all the wonderful care. Resting at Brenan’s Bay View Funeral Home, 1461 Manawagonish Road, Saint John, (634-7425) with visitation on Monday, August 31, 2015 from 2-4 and 6-8 PM. A funeral service will be held on Tuesday, September 1, 2015 at 11:00 AM from The Church of the Resurrection, Grand Bay-Westfield. Interment will take place at Hillcrest Cemetery, Clarendon. For those who wish, remembrances in memory of Blanche may be made to Bobby’s Hospice or a charity of one’s choice.

Share Your Memory of
Blanche
Upload Your Memory View All Memories
Be the first to upload a memory!