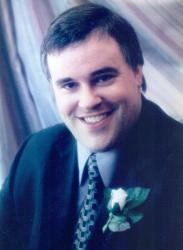 It is with heavy hearts that the family of John McGillicuddy of Dartmouth, NS and formerly of Saint John, NB, beloved husband of Jill (Justason) McGillicuddy announces his passing, which occurred on Saturday, August 29, 2015 at the QEII Health Sciences Centre, New Infirmary Site, Halifax. Born on July 27, 1969 in Saint John, he was the son of Shirley (Creamer) McGillicuddy of Saint John and the late Francis McGillicuddy. John was a loyal employee of Eastlink. He was a true family man whose children were his world. John’s unique sense of humour will always be fondly remembered by all who knew him. He will be sadly missed. In addition to his wife and mother, John is also survived by his precious children, Aron John and Sara Elaine; sisters, Susan McGraw, Mary Jane McGovern (Keith) and Kara Leger (Matt) all of Saint John; mother-in-law, Colleen Justason of Halifax; brother-in-law, Rob Justason (Kate) of Saint John; nieces and nephews, Brittany and Maggie McGraw, Justin Justason, Molly and Ryan McGovern; as well as several aunts, uncles and cousins. He was predeceased by his brother-in-law, Mike McGraw. Resting at Brenan’s Bay View Funeral Home, 1461 Manawagonish Road, West Saint John with visiting on Friday, September 4, 2015 from 7:00 – 9:00 PM. The funeral service will be held from Brenan’s Bay View Chapel on Saturday, September 5, 2015, at 10:00 AM. In lieu of flowers, remembrances may be made to the Heart and Stroke Foundation, IWK or to the Children’s Wish Foundation.