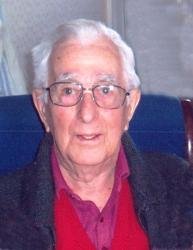 Harold "Bussie" Hubert Melanson passed away peacefully on September 8, 2015, at Ridgewood Veteran Wing. Born on October 5, 1918, Harold was a son of the late William J. and Annie M. (Long) Melanson. Bussie was veteran of World War II with the 7th Medium Regiment, Royal Canadian Artillery, starting his training in England and serving also in France, Belgium, Holland and Germany. He was a member of the Royal Canadian Legion, Branch # 69. He worked as a longshoreman and was a member of the International Longshoremen's Association ILA Local 273 and was very active in the union. Bussie was an avid softball player and won two Maritime Championship in his younger years and always cheered for the New York Yankees. Surviving are his children, Ernest "Ernie" (Kim), Melanson, Saint John and Zelda Melanson (Kevin McCarthy), Saint John; grandchildren, Katie (Steve) Delaney, Nauwigewauk and Erin Melanson, Saskatoon; cherished great grandchildren Olivia and Abby Delaney; long time friend and neighbour, Bob Williams; several nieces and nephews. Besides his parents he was predeceased by his wife, Thelma; brothers, George and Allan; sisters Thelma Barnes; Bertha Henderson and Elda Henderson. The Family would like to say Thank-you to the Staff of Ridgewood Veteran's Wing, for all their wonderful care they provided to Harold during his stay. Resting at Brenan’s Bay View Funeral Home, 1461 Manawagonish Road, West Saint John with visiting on Thursday, September 10, 2015 from 4-8 PM. The funeral service will be held from Brenan’s Bay View Chapel on Friday, September 11, 2015, at 1:00 PM. Interment will take place at The Church of the Good Shepherd Cemetery. For those who wish, remembrances may be made to the Church of the Good Shepherd, Ridgewood Veteran’s Wing or a charity of one’s choice.

Share Your Memory of
Harold
Upload Your Memory View All Memories
Be the first to upload a memory!