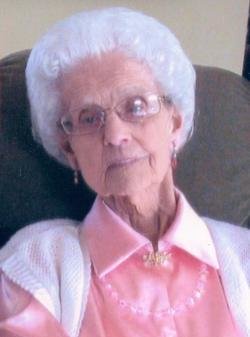 The death of Regina Anne Riley occurred on September 28, 2016 at Turnbull Nursing Home surrounded by her loving family at the age of 101. She finished this earthly journey just as she lived her life; with admirable courage, dignity, strength and faith. She was born to the late Michael and Annie Kiley (McGouey) on April 4, 1915. She was pre-deceased by her husband, George R. Riley; sisters Marion and Ellen and brothers Willian, Leo, Patrick, Urban and David Kiley. She is survived by her beloved son, Paul R. Riley (Judy) and her grandchildren; Patty (Dave) Black and Chris (Sarah) Riley all of Grand Bay-Westfield. In addition, the light of her life was her great-grandson Colin Black whom she loved dearly. She is also survived by several special nieces and nephews and her cherished sisters; Margaret McLeod and Rita Melanson. She found no greater pride in life than her family. The family wish to express their sincere gratitude for the care she received during her period of failing health while at home. The staff of Turnbull Home quickly became her family eleven months ago and the professional and compassionate care she received was second to none. In addition, the family owe a debt of gratitude to Father David Martin for his heartfelt support and attention not only to Regina but to her family as well. Arrangements are under the care of Brenan’s Bay View Funeral Home, 1461 Manawagonish Road, Saint John, NB (634-7425) with visitation on Friday, September 30th from 2:00 – 4:00pm and 6:00 – 8:00pm. A Mass of Christian Burial will be celebrated from St. Augustine’s Catholic Church in Grand Bay-Westfield on Saturday, October 1st at 10:00am. Interment will take place at St. Joseph’s Cemetery. For those who wish, remembrances can be made to Turnbull Nursing Home, the Kelly A. Ingalls Scholarship Fund or a charity of the donor’s choice.

Share Your Memory of
Regina
Upload Your Memory View All Memories
Be the first to upload a memory!