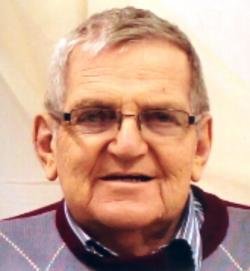 The death of William "Clyde" McCavour of Lorneville, beloved husband of Kathy (Morton) McCavour occurred on Monday, December 12, 2016 at the Saint John Regional Hospital. Born on January 10, 1941 in Saint John, he was the son of the late Harry and Edith (Thomson) McCavour. Prior to his retirement, Clyde was employed for 47 years with Irving Pulp and Paper. His pride and joy were his precious grandchildren who will always remember their grandfather as playful and loving. Clyde also had a special memories of his time spent playing in the Jervis Bay Memorial Pipe Band with his children. He enjoyed coaching and playing hockey; as well as a good game of golf. Clyde loved boating, fishing, skidooing, travelling and music. He will be sadly missed. In addition to his wife, Kathy, Clyde is also survived by his daughter, Leisa (Jeremy) of Scotland; sons, Chris (Sandra) of Lorneville and Tim (Amy) of Woodmans Point; grandchildren, Shane, Kayla, Meghan and Riley; sister-in-law Fraze Wittrien; as well as several nieces and nephews. Besides his parents, he was also predeceased by his brother, Stephen Lewis (Fern); brothers-in-law, Richard Morton and Glen Wittrien. Clyde’s family would like to extend a special thank you to the staff of the Dialysis Unit, Emergency Department and the many doctors and staff that looked after him over the years. Resting at Brenan’s Bay View Funeral Home, 1461 Manawagonish Road, West Saint John (634-7425) with visiting on Saturday, December 17, 2016 from 2:00 - 8:00 PM. The funeral service will be held from Brenan’s Bay View Chapel on Sunday, December 18, 2016 at 2:00 PM. For those who wish, remembrances may be made to the SJRH Dialysis Unit c/o SJRH Foundation, Kidney Foundation of Canada or a charity of the donor’s choice.