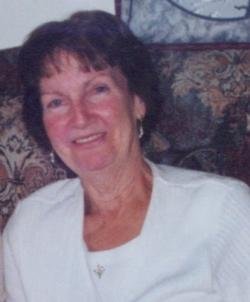 It is with heavy hearts the family of Edith Marie (Gauthier) Doiron, wife of the late Clarence Joseph Doiron, announce her passing at the Carleton Kirk Lodge on Friday, May 26, 2017. Born in Minto on October 24, 1933 she was a daughter of the late Benjamin and Melina (Gauthreau) Gauthier. Before retirement, Edith worked for Mt. Pleasant Group Home and Dr. Roberts Hospital in housekeeping. Above all else, she had a great love for her children and grandchildren. Edith is survived by her children: Robert (Janet) Doiron, Annette White, Norma (Ken) Bradford and Barbara Doiron; brother Alyre Gauthier; several grandchildren, great grandchildren, nieces and nephews. In addition to her parents and husband, she was predeceased by her daughter Elaine Parent and infant daughter Lorraine, and siblings: Ernest, Ben, Fidel, Gerald, Noella Belliveau, Gladys Guislain and Jeannie Anderson. Edith’s family would like to thank the Staff of Carleton Kirk Lodge for their amazing care, compassion and support shown to Edith during the time she spent with them. Resting at Brenan’s Bay View Funeral Home, 1461 Manawagonish Rd., Saint John, NB (634-7425) with visitation on Tuesday, May 30, 2017 from 2-4 and 6-8 PM. A Mass of Christian Burial will be celebrated from Our Lady of the Assumption Church, 360 Dufferin Row, Saint John, on Wednesday, May 31, 2017 at 12:00 PM. Interment will take place at St. Augustine’s Cemetery. In lieu of flowers, remembrances to the Carleton Kirk Lodge or the Heart and Stroke Foundation of NB would be appreciated by the family.

Share Your Memory of
Edith
Upload Your Memory View All Memories
Be the first to upload a memory!