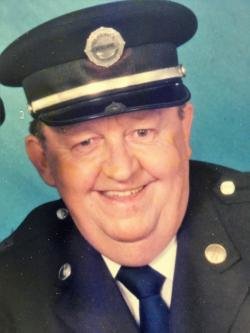 It is with heavy hearts that the family of Robert McCarthy, husband of 60 years to the late Denise (Badeau) McCarthy, announces his passing which occurred on Sunday, May 28, 2017 at the Saint John Regional Hospital with his family by his side. Born on July 31, 1929, he was a son to the late John and Norah (Stevens) McCarthy. Bob was employed as Lieutenant with the Saint John Fire Department for 30 years. During his employment, he was a member of the Saint John Firefighter Pipe Band. He dedicated much of his time volunteering and being part of his community. Bob coached little league baseball, the Lancaster Canadians minor hockey, he was a Cubs and Scouts leader at St. Rose Parish. He was involved in the New Brunswick Firefighters Curling Association as the Provincial Director and Secretary. Bob was a founding member of the Knights of Columbus council 8094, and was a 4th Degree member. In his retirement, Bob took great pleasure in the time he spent in his wood shop. He, and longtime friend, Ralph Folkins could be found making many different items for their yards and the yards of their loved ones. Above all, Bob cherished the time spent with his family; especially his granddaughters who were the apples of his eye. Bob will be fondly remembered by his family, his children: John (Nina) McCarthy, Janice McCarthy (Timothy Bell-Smith), his granddaughters: Abigail McCarthy and Zoe Bell-Smith, along with nieces, nephews and members of his extended family. Besides his parents and wife, Denise, Bob was predeceased by his grandson Brendan McCarthy and brother Paul McCarthy. Arrangements have been entrusted to Brenan’s Bay View Funeral Home, 1461 Manawagonish Road, Saint John (634-7425) where visitation will be held on Wednesday, May 31 from 2-8. A Mass of Christian Burial will take place on Thursday, June 1 at 12 Noon from St. Rose of Lima Parish, 541 Milford Road with interment to take place at Holy Cross Cemetery. For those who wish, remembrances may be made to the SJRH-Palliative Care Unit or to a charity of donor’s choice.