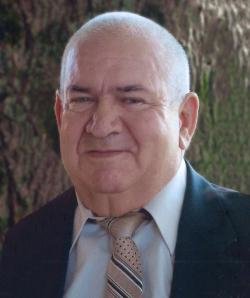 With heavy hearts, the family of George Fifield, loving husband of 59 years to Shirley (Scott) Fifield, announce his passing on Sunday, May 28, 2017 at the Saint John Regional Hospital. Born April 29, 1938, he was the youngest son of the late Jack and Maisie (Edmanson) Fifield. George (Georgie) was a lifelong resident of Saint John, NB. He worked for several years at the Sugar Refinery and then for a few other local businesses. George loved, and supported the Saint John city and very specifically, he was well known to the orthopedic community. Although he had "marble bone disease" and had broken every major bone and many other bones; he did not let that deter him from his cause. He was an outstanding fundraiser for HIP HIP Hooray, a local hip replacement program. For several years he was their top producer and received an award honouring his dedication and contributions. Georgie had a very kind heart, a quick smile and a contagious laugh that made you smile whenever you saw him. He was a fantastic cribbage player! He was a dedicated member of Lancaster Baptist Church, a devout Christian and he could frequently be found reading his Bible. He loved his wife dearly and his family. George’s other love was music, especially country music. George and Shirley travelled to Nashville, Tennessee to see the Grand Ole’ Opry. He was a fabulous musician and played the "Rhythm Bones". For several years and on several occasions George was the percussion section for the Park Avenue Fiddlers, the Cool Chicks and Ugly Doclings, and the Lancaster Baptist Worship Team. Georgie was one of the best "Bones" players around and he could play at a moment’s notice. We will miss you dearly! Special thanks to the nurses of 5AN, SJRH for their support. In addition to his wife, Shirley, George is survived by his brother, Douglas (Shirley); son Paul; grandchildren: Megan, Madison, and Emma; sister-in-law, Beatrice Scott; nieces, Heather Barton (Kevin) and Barbara Smith; and nephews, John Fifield (Tammy) and Bert Scott (Jennifer). Besides his parents, he was predeceased by his brother-in-law, Don Scott. Arrangements are under the care of Brenan’s Bay View Funeral Home, 1461 Manawagonish Road, Saint John (634-7425), where the family will receive visitors on Thursday, June 1, 2017 from 2 to 4 and 6 to 8 pm. A funeral service will be held on Friday, June 2, 2017 at 11 am from Lancaster Baptist Church, 87 Church Avenue. Remembrances to the Orthopedic program at the SJRH or a charity of the donor’s choice would be appreciated by the family.

Share Your Memory of
George
Upload Your Memory View All Memories
Be the first to upload a memory!