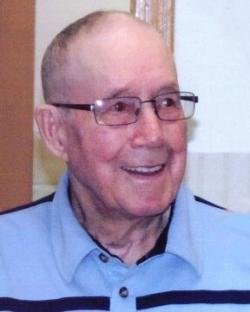 The death of Alvin Perkins of Saint John, beloved husband of the late Lois (Graham) Perkins occurred on Saturday, June 3, 2017 at the Saint John Regional Hospital. Born on March 26, 1925 in Wirral, he was the son of the late Charles and Caroline (Booth) (Washburn) Perkins. Alvin was a proud veteran of World War II. Prior to his retirement, he was employed as a mason and was a lifelong member of the bricklayer’s union. For many years, Alvin was a member of St. Giles United Church, where he served as Trustee and was currently a member of Westfield United Church. Alvin loved the outdoors and especially enjoyed fishing, gardening and back road driving. He also enjoyed woodworking and will be sadly missed. Alvin is survived by his children, Dwight Perkins (Betty) of Dartmouth, NS and Kathy Perkins of Saint John; grandchildren, Graham Perkins (Paula), Ryan Perkins and Kathryn Wier (Jason); precious great-granddaughter, Chloe Wier; sisters-in-law, Lily Perkins, Marion Graham and Darlene Graham; as well as several nieces and nephews. Besides his parents and wife, he was also predeceased by a daughter in infancy; his siblings, Neal Perkins, Wallace Perkins, Lillian Phillips and Joyce McCracken; half-brother, Hibbert Washburn and other half-brothers and sisters. Although there will be no visitation by Alvin's request, relatives and friends are invited to attend the funeral service, which will be held from Brenan’s Bay View Funeral Home Chapel, 1461 Manawagonish Road, West Saint John (634-7425) on Tuesday, June 6, 2017 at 11:00 AM. Interment will take place in Patterson United Church Cemetery, Hoyt. In lieu of flowers, remembrances may be made to a charity of the donor’s choice.

Share Your Memory of
Alvin
Upload Your Memory View All Memories
Be the first to upload a memory!