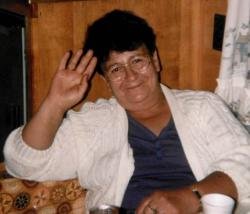 It is with great sorrow that the family of Tersa Chiasson, beloved wife of the late Leonard Chiasson announces her passing, which occurred on Wednesday, February 28, 2018 at Kings Way Care Centre, with her family at her side. Tersa fought a hard and long battle with Dementia and Alzheimer’s disease to which she succumbed to. Born on February 2, 1936 in Bathurst, she was the daughter of the late John and Melina (Glazier) Desylva. Tersa was a hard worker all of her life and in her younger years was employed at Green’s Restaurant. Prior to her retirement, she worked at and was known as a fabulous cook at the Villager Restaurant in Prince Edward Square Mall. Tersa leaves to mourn her children, Geraldine Hatfield (David), Leonard Chiasson (Blondin), Ernest Chiasson (Lorraine), Harven Chiasson, Gerald Chiasson, Angeline Chiasson (Gordie Hamilton), Rose Chiasson and Shirley Geldart (Roger); as well as 18 grandchildren, 19 great-grandchildren and 1 great-great-grandson. Also left to mourn are her sisters, Theresa Hachey (the late Xavier) and Georgette Dignard (Lozard) and brothers, Douglas Desylva (Bea), Harven Desylva (Lucy) and William Desylva. Besides her parents and husband, she was also predeceased by her son, Leon Chiasson; daughter, Barbara Chiasson; grandsons, Curtis Chiasson and Matthew Chiasson and brothers, Ernest Desylva and Jean Desylva. Tersa’s family would like to thank the entire staff of Kings Way Care Centre for the excellent care and friendship that was always offered to her. In keeping with Tersa’s wishes, no visitation or funeral service will take place. A private family interment will take place at St. Joseph’s Cemetery at a later date. Arrangements are under the care and direction of Brenan’s Funeral Home, 111 Paradise Row, Saint John (634-7424). For those who wish, remembrances may be made to her late grandson Matthew Chiasson’s GoFundMe page to help cover his funeral expenses.

Share Your Memory of
Tersa
Upload Your Memory View All Memories
Be the first to upload a memory!
Share A Memory