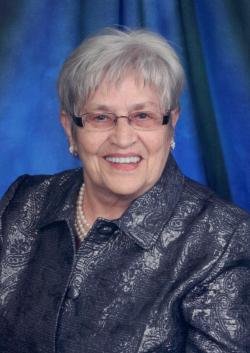 It is with great sadness that the family of Barbara Rosalie Wallace, loving wife of the late Douglas Livingstone Wallace, announces her passing which occurred on Monday, March 5, 2018 at the Saint John Regional Hospital with her family by her side. Born on November 30, 1932 in Saint John, she was a daughter to the late Calvin and Lorena (Hines) Suttie. Barbara was a loving wife, mother and grandmother, who enjoyed spending her days with her family, especially her grandchildren who gave her such joy. She was a woman of faith and one of the longest serving members of Cornerstone Baptist Church, formerly Central Baptist, where she shared her love of music in the church choir. Barbara was a passionate artist who enjoyed painting with local artists. In earlier years, while living on Johnston Road, many memories and friends were made. Barbara loved life, her family and living each moment to its fullest. Barbara will be dearly missed by her children: Michael Wallace, Janice (Peter) Murray, Janet Hall and Judy (Dan) Lane, her grandchildren: Jessica (Joel) Nattrass, Adam Murray (Tayrn Dixon) and Andrew Murray (Afton Koutzon), Luke (Brianna) Hall, Mark Hall and Calvin Hall (Robyn Hayes) and Lia Lane, her great grandchildren: William and Rose Nattrass, Hanna, Sawyer and Charlotte Hall, her son-in-law Gary Hall, sister Norene Martin, sisters-in-law: Shirley Toole and Doreen Humphrey and brothers-in-law Larry (Margaret) Wallace and Jerry (Sheila) Wallace along with many nieces, nephews and members of her extended family. Besides her parents and husband Douglas, Barbara was predeceased by her brother Harold (Audrey) Suttie, nephew Bradly Martin and brothers-in-law: James Martin, Pat Toole and Ronald Humphrey Resting at Brenan’s Funeral Home, 111 Paradise Row, Saint John (634-7424) where family and friends are invited to visit on Thursday, March 29 from 2:00-8:00 PM. A Funeral Service will take place at Cornerstone Baptist Church, 42 Leinster Street, on Friday, March 30 at 11:00 am. Interment will take place at Fernhill Cemetery at a later date. For those who wish, remembrances made to Romero House, Heart and Stroke Foundation or the Canadian Diabetic Association would be appreciated.

Share Your Memory of
Barbara
Upload Your Memory View All Memories
Be the first to upload a memory!
Share A Memory