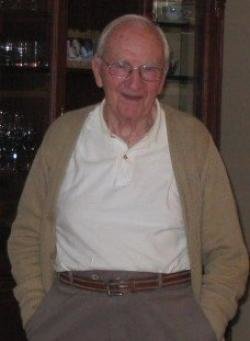 It is with appreciation for a life well lived that the family of William "Bill" Lawlor, husband of the late Helen E. (Ferguson) Lawlor, announce his peaceful passing, which occurred on Sunday, March 11, 2018 at the Saint John Regional Hospital. Born in Saint John on July 27, 1923, he was a son of the late William and Helen (Gillis) Lawlor. Bill was a man of faith who cared deeply for his community. He was a member of Our Lady of the Assumption Church for many years, and tried his very best not to miss Sunday Mass. He was an active member of the Royal Canadian Legion Branch 69, and served his country during WWII in the Air Force. Bill was an independent business man, either owning or co-owning the following businesses: Regal Wholesale, National Vending Company, Peter J. Lawlor Limited, and the Kwik Pik. He was Past President of the Thistle – St. Andrew’s Curling Club and a member of the Grand Bay Knights of Columbus. He actively volunteered for Meals on Wheels, and was on the Planning Advisory Committee for the town of Grand Bay-Westfield during his time living there. He was a wonderful father, grandfather, great-grandfather, and friend and will be missed by everyone who knew him. He will be missed by his children: Rick Lawlor (Wanda), Debby Fullerton (Tom), Nancy Ritchie (Gord), and Andrew Lawlor; his grandchildren: David (Kim), Colleen, Meaghan (Jay), Caitlin, Ian, and Alex (Erin); his great grandchildren: Will, Lauren, Nick, and Oliver; a sister, Joan Ward (the late Oz); as well as numerous nieces, nephews, and extended family members. In addition to his parents, Bill was predeceased by his beloved wife, Helen Eileen (Ferguson) Lawlor; and his siblings: Kay, Maureen, Greg, Laurie, and Bud. Resting at Brenan’s Funeral Home, 111 Paradise Row, Saint John, NB (634-7424) with visitation on Tuesday, March 13, 2018 from 4-8 pm, with a Legion Tribute service being held during visitation at 7 pm. A Mass of Christian Burial will be celebrated from Our Lady of the Assumption Church, 360 Dufferin Row, Saint John on Thursday, March 15, 2018 at 12:00 pm. Interment will take place at Holy Cross Cemetery. For those who wish, remembrances may be made to any charity of the donor’s choice. ***DUE TO INCLEMENT WEATHER, MR. LAWLOR'S FUNERAL HAS BEEN POSTPONED. NEW MASS OF CHRISTIAN BURIAL DATE IS THURSDAY, MARCH 15TH, 2018 AT 12 NOON FROM OUR LADY OF THE ASSUMPTION CHURCH***