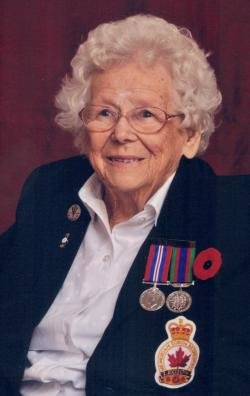 With appreciation for a life well-lived, the family of Marjorie Alice Graves announces her passing, which occurred on Thursday, March 15, 2018 at Ridgewood Veterans Wing. Born in Carrolls Crossing, NB on June 30, 1922, she was a daughter of the late Weldon and Evelyn (Storey) O’Donnell. Marjorie was predeceased by her loving husband, John Irwin Graves on January 11, 2018 after 75 years of marriage. She met John, the love of her life, in Fredericton, NB when they joined the Army and were married shortly after. They started their family and Marjorie was a caring and devoted mother to her children. She enjoyed caring for her garden, traveling with her husband, and in her later years, spending time with her precious grandchildren and great-grandchildren. Marjorie will be missed by two daughters: Judith Walsh (Ken) of Black River and Kathy Baxter (Wayne) of Baxters Corner; Three sons: John (Donna), Douglas (Sandra) and Barry Graves all of Black River; thirteen grandchildren; fifteen great-grandchildren; her siblings, Raymond O’Donnell (Patricia), Lloyd O’Donnell (Toni) and Sheila Doak; as well as several nieces and nephews. In addition to her husband and parents, Marjorie was predeceased by her siblings: Russell, Isabel, Bonar, Spencer and Rowena. The family would like to express their thanks and appreciation to all the staff at Ridgewood for the care and kindness shown to our mother and to us. We would also like to thank Dr. Williamson and Dr. Grant for their care. Resting at Brenan’s Funeral Home, 111 Paradise Row, Saint John, NB (634-7424) with visitation on Monday, March 19, 2018 from 2-4 and 6-8 pm. The Royal Canadian Legion veteran tribute service will be held during visitation at 7:00 pm. A Celebration of Marjorie’s life will be held on Tuesday, March 20, 2018 at 2:00 pm from Brenan’s Funeral Home Chapel. She and John will be laid to rest together at a later date in St. Thomas Anglican Church Cemetery, Black River. For those who wish, remembrances may be made to any charity of the donor’s choice. Online condolences can be placed at www.BrenansFH.com

Share Your Memory of
Marjorie
Upload Your Memory View All Memories
Be the first to upload a memory!