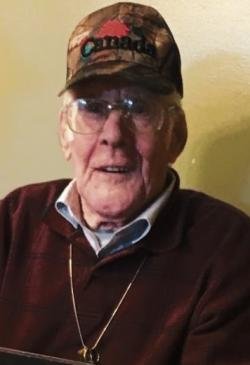 It is with appreciation for a life well lived that the family of Michael Joseph Melanson, husband of the late Jennie Evelyn (Campbell) (Doucette) Melanson, announce his passing, which occurred on Sunday, March 18, 2018 at the Saint John Regional Hospital. Born in Saint John on January 28, 1928, he was a son of the late Michael J. and Annie May (Extell) Melanson. Mike worked at a few odd jobs before going to work for the ILA. He was an avid fisherman and hunter and also a great storey teller. Mike enjoyed listening to music, especially Johnny Cash and Alan Jackson. His favorite time was the time he spent with his family and friends. He will be missed by his daughters: Barbara Doucette and Susan Waye (Peter); several step children; numerous grandchildren and great grandchildren; brother, Ronnie Melanson; as well as numerous nieces, nephews, and extended family members. In addition to his parents, Michael was predeceased by his beloved wife, Jennie; his infant son, Gary Michael; eldest daughter, Edith Waye (Brian); sisters: Clara Gray (Gordon), Betty Petts and Theresa Belding along with brother, Everett Melanson. Resting at Brenan’s Funeral Home, 111 Paradise Row, Saint John, NB (634-7424) with visitation on Tuesday, March 20, 2018 and Wednesday, March 21, 2018 from 2 – 4 and 7 - 9 pm, A funeral service will be celebrated from Brenan’s Funeral Home Chapel on Thursday, March 22, 2018 at 2:00 pm. Interment will take place at Cedar Hill Extension Cemetery. For those who wish, remembrances may be made to the Kidney Foundation of Canada, NB Lung Association or Alzheimer Society of NB.