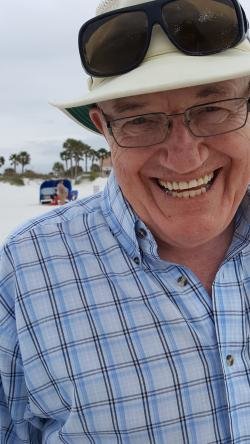 It is with heavy hearts that the family of David Ralph Drake, loving husband of Vera ( Myers ) Drake, announce his peaceful passing which occurred on March 20, 2018 at the Saint John Regional Hospital. Born in Woodstock on March 17, 1946, he was a son of the late Ralph and Greta (Briggs) Drake. In his early years in Avondale he worked with his Dad at Barretts farm, Then Humpty Dumpty foods, and 12 yrs as a Paramedic. He was a leader with his boys in Scouts and Ambulance cadets. He loved his time kayaking, camping , playing with his tractor and building projects with family. David most of all was a man of faith who loved God and showed that love to the world around him. In addition to his wife Vera, David will be fondly remembered by his sons: Kevin Drake (Lesley) of Harvey and Kenneth Drake (Crystal) of Keswick; stepdaughters: Deborah Hughes (Mark) of Saint John and Deline Forward (Gary) of Fredericton; sisters: Jo-Anne Harris (Bob) of Saint John and Gail Lawrence (Doug) of Woodstock; brothers: Blair Drake (Sherry) of Fredericton and Lorne Drake (Marilyn) of Woodstock; sister-in-law, Carolyn Drake of Woodstock; as well as ten grandchildren. In addition to his parents, David was predeceased by his first wife, Donna , second wife Sharon, his brothers Arnold and Terry. Resting at Brenan’s Funeral Home, 111 Paradise Row, Saint John (634-7424) with visiting on Friday, March 23, 2018 from 2-6 PM. A funeral service will be held on Saturday, March 24, 2018 at 1PM from Rivercross Church, 61 Forbes Drive, Saint John. Interment to take place in Waterville Baptist Church Cemetery, 282 Estey Road in Waterville, N.B. at a later date. For those who wish, remembrances may be made to Rivercross Church or a charity of the donor’s choice.