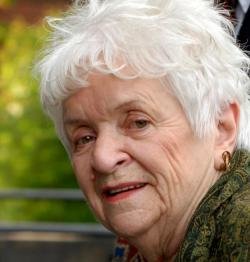 Claire Collins died peacefully at home surrounded by her family on Wednesday, March 21, 2018. Claire was born on March 14, 1925 in Saint John, NB to the late Alice (Byron) Gallant and Howard Gallant. She was the beloved wife of the late Francis Xavier Collins, mother to Judith Collins of Saint John, David (Barbara) Collins of Halifax, Martha (Kim) MacPherson of Moncton, Tim (Donna) Collins of Saint John, Eileen (Al) Dobson of Saint John and Frank Collins (Jodi) of Fredericton. Claire was predeceased by her brother Byron Gallant, sisters Ruth Gallagher and Constance Dryden, husband Frank in 2010, son-in-law Al Dobson in 2011 and daughter Judith in 2016. Claire is survived by her cherished sister Nancy McLaughlin of Saint John, sister-in-law Jean Gallant of Saint John, and several nieces, nephews and extended family but most assuredly her grandchildren who adored her, and great grandchildren who were just beginning to get to know her. Claire was a devoted wife, mother, sister, grandmother, friend and mentor. She had ascorbic wit and loved nothing more than a dual of words. In her youth, she enjoyed pranks and practical jokes. Mom felt if her obituary read: "Claire Collins, mother of six…" nothing more needed to be said. Claire will be deeply missed by her family and friends as one of the fanciest of ladies. The Collins family wish to express their sincerest "Thanks" to Mom’s caregivers: Amy, Joanne, Rachelle and Emily who made it possible for mom to stay in her own home. Resting at Brenan’s Funeral Home, 111 Paradise Row, Saint John (634-7424) where family and friends are invited to visit on Friday, March 23 from 2-4 and 6-8. A Mass of Christian Burial will take place on Saturday, March 24 at 11:00 am from St. Peter’s Parish, 50 Clarendon Street. Interment will take place at Holy Cross Cemetery at a later date. In lieu of flowers, and for those who wish, remembrances may be made to the Children’s Wish Foundation of Canada, NB Chapter.

Share Your Memory of
Claire
Upload Your Memory View All Memories
Be the first to upload a memory!