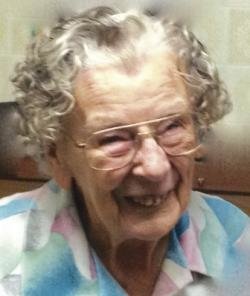 It is with great sadness that the family of Lydia Parlee Keith, wife of the late John F. Keith, announce her peaceful passing which occurred on March 22, 2018 at Kennebec Manor. Born in Saint John on June 4, 1919, she was a daughter of the late George H. and Mary B. (McCafferty) Lawson. Lydia was a lifelong member of Portland United Church. She liked to read, talk and do crossword puzzles. She will be missed by all who knew her. Lydia is survived by her children Mary Pearson (Bud) of Sussex, NB, Charles Keith (Terry) of Dartmouth, NS and Patricia Brown (Roger) of Victoria, BC; nine grandchildren; 14 great-grandchildren; six great-great- grandchildren and several nieces and nephews. In addition to her husband and parents, Lydia was predeceased by her son, James Keith; brothers: Wendell Best, James Best, Reginald Lawson and Charles Lawson; and her sisters, Ella Oliver and Agnes Louise Stonely. Arrangements are under the care and direction of Brenan’s Funeral Home, 111 Paradise Row, Saint John (634-7424). Honouring Lydia’s wishes, there will be no visitation or funeral service. For those who wish, remembrances may be made to the Saint John Regional Hospital Foundation or any charity of the donor’s choice. Online condolences can be made at www. BrenansFH.com.

Share Your Memory of
Lydia
Upload Your Memory View All Memories
Be the first to upload a memory!