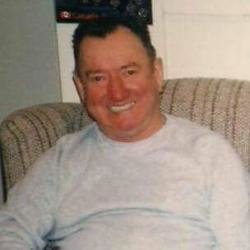 It is with sadness that the family of Walter "Wally" McGrath, announce his passing which occurred on Monday, March 26, 2018 at the Saint John Regional Hospital. Born on January 26, 1932, he was one of 13 children to the late Joseph and Viola (Powers) McGrath and step-mother Catherine (Bennett) McGrath. Wally retired from Ocean Steel after 36 years of service. He resided in the Prince Edward Square apartments for over 30 years and could often be found spending his time in the square or the mall. Wally was also an Adanac member for many years, along with the Buffalo Club and the Red Chevron. Wally will be dearly missed by the family he leaves behind, his special niece Susan McGrath and her children Xavier and Alexander, his brothers: Wayne of Victoria, BC, Keith of Halifax, Blair (Karen) of Calgary, Lloyd (Joan), Marven (Clarice), Brian (Pearl) all of Saint John, sisters: Margaret (Robert) Ferguson of Moncton, Shirley (David) Meier of Edmonton and Ann (Roger) Goguen of Miramichi, sisters-in-law Phyllis McGrath of Saint John and Edith McGrath, along with many nieces, nephews and members of his extended family. Besides his parents, Wally was predeceased by his step-mother Catherine and brothers: Allen and Joseph, sister Helen Connors and sister-in-law Ilsa McGrath. Arrangements have been entrusted to Brenan’s Funeral Home, 111 Paradise Row, Saint John (634-7424) where visitation will be held on Friday, March 30 from 2-4 and 6-8. The Funeral Liturgy will be held on Saturday, March 31 at 12:00 PM from Brenan’s Funeral Home Chapel with interment to follow at St. Joseph’s Cemetery. For those who wish, remembrances may be made to the Heart and Stroke Foundation or to the Canadian Cancer Society.

Share Your Memory of
Walter
Upload Your Memory View All Memories
Be the first to upload a memory!