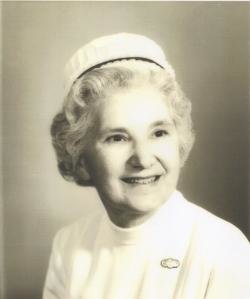 The family of Clarissa Patricia Josephine Hurley, R.N. is deeply saddened to announce her death, on March 27th, at Rocmaura Nursing Home in Saint John. Born on March 15th, 1920, she was the daughter of the late Daniel and Clara (née Maher) Hurley of Barnaby River, New Brunswick. Clarissa devoted her long, remarkable life to her faith, family, friends, and work. In 1938, she left the family farm at Semiwagon Ridge near Barnaby River to train at the Hotel Dieu Hospital in Chatham, where she graduated as a Registered Nurse. At the Civic Hospital in Ottawa she developed her specialty in obstetric and pediatric nursing. In the late 1940’s, she traveled to New York to join the order of religious sisters, Filiarum Mariae, Salutem Infirmorum (Daughters of Mary, Health of the Sick). As Sister Mary Carmel, she provided care to disadvantaged women and children in New York City’s most troubled areas, and spent several years at the order’s foreign mission in Okinawa, Japan. In the mid-1970’s, she returned to her native New Brunswick, where she continued nursing, cared for her aging parents, and turned her formidable work ethic to a second career as a data processor at Saint John’s Scotiabank Centre. Clarissa was a steadfast, loving friend, always on hand with perceptive and practical advice. A woman of strong convictions, she was nonetheless tolerant and non-judgmental. Loquacious and articulate, she was a natural storyteller with an infectious laugh. She lived simply, unconcerned with the acquisition of material belongings. Her only indulgence was a daily trip to Tim Horton’s for a ham and cheese biscuit; her only extravagance was her boundless capacity for love, empathy, and compassion. Survived by her sisters, Alice (Cliff, dec.) and Stella (Ray Renneburg); brother, Anthony (Louise); 25 nieces and nephews, and their many children. Predeceased by her parents as well as her siblings Martin, John (Joyce), James (Anne), Joe, Daniel (Kathleen), Peter (Marie), Raymond (Frances), Mary, and Phoebe, as well as her nephew, Michael. Clarissa’s family extends heartfelt thanks to the devoted nurses and caregivers at Rocmaura Nursing Home. Arrangements are under the direction of Brenan’s Funeral Home, 111 Paradise Row, Saint John (634-7424), with visitation on Wednesday, April 4, 2018 from 5:00 – 7:00 pm. A Mass of Christian Burial will be celebrated from Holy Trinity Catholic Church, 21 Canon Street, Saint John, NB, on Thursday, April 5, 2018 at 12:00 Noon, with Father Peter Melanson presiding. Remembrances made to Rocmaura Nursing Home or a charity of the donor’s choice would be appreciated by the family.

Share Your Memory of
Clarissa
Upload Your Memory View All Memories
Be the first to upload a memory!