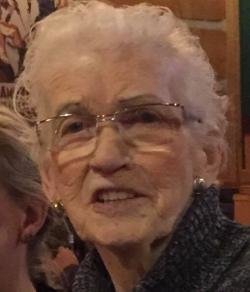 1:15 pm - 12:00 am
Cathedral of the Immaculate Conception
New Brunswick, Canada

It is with heavy hearts that the family of Mary Theresa Kopp announces her passing, which occurred on Sunday, March 25, 2018 at Shannex – Tucker Hall. Born in Loggieville, NB, she was a daughter of the late Clare McGrath and George F. Fleiger. Mary moved to Bathurst at a very early age. She received her early education at Sacred Heart School in Bathurst. When her family moved to Saint John, she attended St. Vincent’s High School. Following high school, Mary studied business at Modern Business College. She worked at Manchester Robertson Allison (Audit Office) for several years. She then went to work for the City of Saint John where she met and married her first husband, Charlie Farrell (Deceased). Mary moved to California, where she met her second husband, Leonard Kopp (Deceased). Mary returned to Saint John, taking residence in the Chateau de Champlain. Mary’s family and faith were a top priority in her life. She will be missed by many for her sharp wit and funny stories. Mary will be in her family and friend’s hearts forever. Mary is survived by her brother David Fleiger, stepson, Dr. Donald Farrell, of Saint John, and three step daughters: Marilyn (Sam) Mukhar, Marjorie (John) McKim, and Kathy Casmey, all residing in California. She is also survived by several grandchildren, great-grandchildren, nieces, and nephews. Aside from her parents, she was predeceased by her siblings: Frank, Rose, Margaret, Roger, Clarence and Elizabeth; and stepson Frederick Farrell. Arrangements are under the care of Brenan’s Funeral Home, 111 Paradise Row, Saint John, NB (634-7424). In keeping with Mary’s wishes, there will be no visitation. A Mass of Christian Burial will take place on Thursday, April 5, 2018, at the Cathedral of the Immaculate Conception at 1:15 PM. Donations may be made to a charity of the donor’s choice. Online condolences may be made at www.Brenansfh.com.