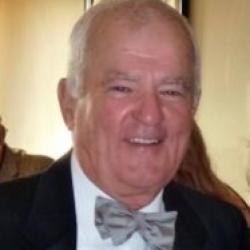 On April 6, 2018 Adam Stanley Pustowka was forced by his 23 year-old 'War-with-Cancer' to leave this beautiful but sometimes troubled earth for another parallel world. He passed away peacefully, surrounded by his beloved family, at Saint John Regional Hospital. The care, medical excellence and expertise he received while being treated at SJRH were truly outstanding and greatly appreciated. Born in 1938 in Warsaw, Poland, he survived the horrors of WWII and the 1944 Warsaw Uprising with his mother and older brother. In 1949 they immigrated to Montreal joining his father who had settled there after being retired as a Squadron Leader from the Royal Canadian Air Force . Adam fell in love with his new country almost immediately and became as fiercely proud a Canadian as you will ever meet. He graduated in 1963 from Concordia (Loyola) University with a Bachelor of Science degree in Math and Physics, married Sandra in 1964 and they raised two children - son Christopher Ira and daughter Cory Veronica. In his professional life he enjoyed two careers; the first in Information Technology associating with two major IT companies, then the second career in Retailing. He admired the concept of Canadian Tire and loved retailing in general. While living in Beaconsfield Quebec, he would sometimes spend his weekends checking out the aisles of the local store (owned by a friend) and planning the possibilities of owning one in the future. In 1981 that dream came true as he applied for and was awarded his first franchise in Walkerton, Ontario. He had a lengthy and rewarding career with Canadian Tire, having owned stores in Walkerton and Essex, Ontario; Yarmouth, Nova Scotia; and finally Saint John where he built a new outlet and remained for 20 years before retiring in 2013. His two careers gave the family an opportunity to experience life in all parts of our magnificent Canada. A firm believer in "giving back", he was involved in many community endeavours and served on four Rotary Clubs having been the President of the Essex Ontario Club. He also served on numerous Canadian Tire committees and Dealer Boards. He and Sandra made many generous contributions to local charities and needy organizations. Adam also had a passion for sports, having played many on High School and University teams. His undying loyalty to the temporarily suffering Habs and the Als was well known. As well known was his love of golf (Riverside Country Club in Rothesay NB and Eagle Creek Golf and Country Club in Naples Florida). SCUBA and skiing were also frequent vacation activities. He and Sandra were passionate about travelling and seeing out-of-the-way, exotic corners of the world, sometimes with the entire family, young an old. Above all else, his family always came first. He was predeceased by mother Zofia, father Karol Sr., and brother Karol Jr. (Grace) of Kingston, Ontario. Survived by cherished and beloved wife of 53 years Sandra (nee Covey); son Christopher (Caroline) their sons Zachariah and Sacha of Calgary; and daughter Cory Brett (Ian) and their son Caleb and daughter Sedona of Rothesay. Arrangements are under the care of Brenan’s Funeral Home, 111 Paradise Row, Saint John (634-7424) www.brenansfh.com. In lieu of flowers, etc., donations to the Saint John Regional Hospital Foundation may be submitted. Celebrations of Life will be held on Tuesday April 10, 2018 from 2PM to 4PM at the Shadow Lawn Inn, Rothesay NB, and on Thursday April 19, 2018 from 2PM to 4PM at 739 Eagle Creek Drive, Naples, FLA. Everyone welcome.

Share Your Memory of
Adam
Upload Your Memory View All Memories
Be the first to upload a memory!