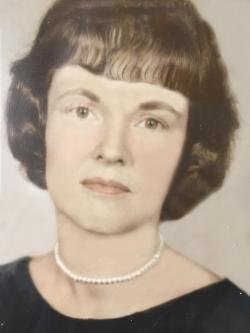 It is with great sadness that the family of June Creamer announces her passing on Monday, April 9, 2018. Born in St. Stephen on June 7, 1927, June was the daughter of the late LeRoy Joseph and Mary Watson (Grant) Creamer. Following her graduation from St. Stephen High School, she attended Holy Rosary Business School and was employed with the Garcelon Stamp Company. As a young woman in the 1940s, June helped care for her young sister during her illness with Tuberculosis. She then lived in Calgary before moving to Saint John in the early 1960s to work for many years as a receptionist for her brother, Dr. Roy Creamer, in his busy obstetrics and gynecology practice. June also worked for several years at the Saint John Regional Hospital as a ward clerk. She was a devoted member of St. Pius X Parish until moving to Rocmaura five years ago. June was an avid walker, and she never failed to delight her family and friends with her beautifully knitted gifts of blankets, sweaters and baby bonnets. A loving daughter, sister and aunt, June was kind and generous and will be deeply missed by her nieces and nephews: Mary Ann, Thomas, Robert, Peter, Nancy, Lucinda, June, Margo and Nea, as well as several great nieces and nephews. In addition to her parents, June was pre-deceased by her sister, Nea, and her brother, Roy. The family would like to thank the staff of Rocmaura Nursing Home for their compassionate care of June over the past several years. Arrangements are under the care of Brenan’s Funeral Home, 111 Paradise Row, Saint John (634-7424). At June’s request, there will be no visitation. A Mass of Christian burial will be celebrated from St. Pius X Church on Saturday, April 28, 2018 at 9 am. Interment will take place in Milltown Catholic Cemetery at a later date. For those who wish, donations may be made to Romero House or a charity of the donor’s choice.

Share Your Memory of
Julia
Upload Your Memory View All Memories
Be the first to upload a memory!
Share A Memory