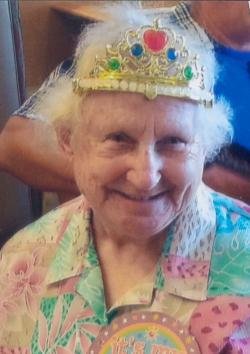 It is with heavy hearts that the family of Doreen Mildred (Chamberlain) Arbo, wife of the late Frank Robert Arbo Sr, announces her passing which occurred on Tuesday, April 10, 2018 at the Loch Lomond Villa. Born in Saint John, NB, she was a daughter of the late Leslie and Mary Margaret (Gaffney) Chamberlain. Doreen worked at St. Joseph’s Hospital in housekeeping for many years. Doreen is survived by her sons: Ronald Chamberlain (Veronica), Frank Jr. (Barbara), Larry (Bernadette); daughters: Debbie (Brian), Cathy (Tim) and Virginia (Eddie); 14 grandchildren and 24 great-grandchildren along with many nieces and nephews and other members of her extended family. Aside from her parents and husband, she is predeceased by her daughter, Jean; brothers: Gordon, Vincent, Eldon, Gerald, Fred and Robert; sisters: Isabelle, Joannie, Jean and Thelma. Resting at Brenan’s Funeral Home, 111 Paradise Row, Saint John, NB (634-7424) with visitation on Friday, April 13, 2018 from 2-4 and 6-8 pm. A Funeral Service will be held at the Brenan’s Funeral Home Chapel on Saturday, April 14, 2018, at 12:00 pm. Interment will take place at a later date at Upper Blackville Baptist Cemetery. Donations in Doreen’s memory may be made to the Alzheimer Society, Canadian Cancer Society or the Heart & Stroke Foundation.

Share Your Memory of
Doreen
Upload Your Memory View All Memories
Be the first to upload a memory!
Share A Memory