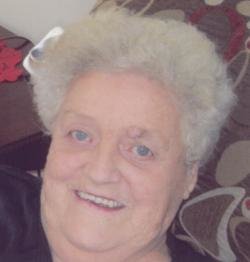 Obituary of Patricia Isabell Given

With very heavy hearts and gratefulness for a life well-lived, the family of Patsy Given, wife of the late Donald F. Given, announce her unexpected passing on Tuesday, April 10, 2018 at the Saint John Regional Hospital. Born March 17, 1935, she was a daughter of the late Matthew and Genevieve (Christianson) Garnett. Patsy was a former employee of McAvity’s, and also worked at the Saint John General Hospital before retiring from Saint John Shipbuilding and Dry Dock Ltd. She loved BINGO, and spending her winnings at the casino, and also loved bowling in her women’s league. Patsy is lovingly remembered by her sons: Raymond Garnett (Debbie), Bruce Given, and David Given (Natasha Brown); her grandchildren: Angela Garnett (Chris LeBlanc), Gregory Given, and Benjamin Given; great-grandchildren, Kamryn and Ashton Garnett-LeBlanc; sisters, Annie Parks and Georgia "Joyce" Garnett (Clifford McKay); sister-in-law, Audrey Norris of Hamilton, ON; and several nieces and nephews. Besides her parents and her husband, Donald, Patsy was pre-deceased by her great-grandson, Ashton John Garnett-LeBlanc; and brothers and sisters: Gerald Garnett, Ronald "Junior" Garnett, and Elizabeth Whittaker. Resting at Brenan’s Funeral Home, 111 Paradise Row, Saint John (634-7424), with visiting on Sunday, April 15, 2018 from 2 to 4 and 6 to 8 pm. A funeral service will be held on Monday, April 16, 2018 at 12 noon from Brenan’s Funeral Home Chapel. Interment will follow in Cedar Hill Extension Cemetery. Remembrances to any charity of the donor’s choice would be appreciated by the family. Please place online condolences and remembrances at www.brenansfh.com.

Share Your Memory of
Patricia
Upload Your Memory View All Memories
Be the first to upload a memory!
Share A Memory