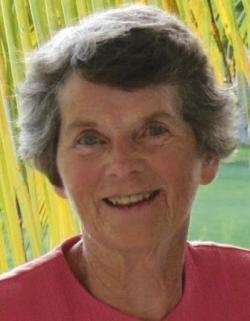 Ann Marie Murray passed away Saturday, April 14th, 2018 at Bobby’s Hospice, Saint John New Brunswick. Ann Marie was born in Saint John on October 17th, 1934, to the late William H. (Bill) and Frances (O’Brien) Buckley. She was raised in Saint John where she met and married Samuel Benjamin (Ben) Murray in 1955, and left New Brunswick with him to support him in his career in the Royal Canadian Air Force. They lived in QC, NS, ON, Germany, and PEI before returning to Saint John in 1993. Their family includes their children: Marie Johnson (Ray Buziak), Lois, Jim (JoAnne), Joanne Slade (Mark) and Paul; grandchildren: Abbey, Blair, Adrian (Steph), Grant (Nicole), Stuart, Ian and Jesse; great-grandchildren: Julien, Elyssa, Kayden, Halle and Rosie. She is predeceased by her husband, Ben, and siblings and in-laws: Dorothy & Chuck Hickey, Bill & Rita Buckley, Lillian & Leo Hickey, Teresa & Mike McCaffrey, Pat Buckley, Ossie Chamberlain, and Eddie Zmboukis; and survived by her sister-in-law, Helen Buckley, sisters Mary Chamberlain and Jean Zmboukis, and many nieces and nephews. Ann Marie was greatly appreciated when she helped care for Marie’s and Lois’s young children. Family vacations were highlights of each year. She was active for over 40 years in the Catholic Women’s League serving, recently, on Saint Joachim’s Council. Her weekly bowling league and the friendships formed there were an important part of her life. She volunteered every Tuesday, for 22 years, at Lakeview Heights School where she truly enjoyed the teachers and her contribution to the lives of the students. Ann Marie regularly spent Sunday afternoons "up country" with her sister, Dot’s family, where her tea biscuits were a favourite. Ann Marie was healthy throughout her life until diagnosed with cancer in August, 2017. Arrangements are under the care and direction of Brenan’s Funeral Home, 111 Paradise Row, Saint John, (634-7424). Mass of Christian Burial will be held on Tuesday, April 24th, at 11:00 AM, at Sts. Joachim and Ann Catholic Church, 144 Simpson Drive, Saint John. A reception will be held in the Church Hall from noon until 2pm followed by interment at St. Bridget’s Church Cemetery, Chapel Grove. In lieu of flowers, the family requests donations to Bobby’s Hospice, Saint John, or the Terry Fox Foundation. www.BrenansFH.com.