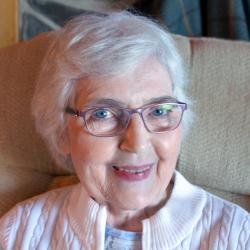 It is with great sadness that the family of Dorothy "Louise" Scott, beloved wife of the late Donald George Scott, announce her passing on March 29, 2018 at the Ottawa Civic Hospital, after a brief illness. Born in 1934 in Saint John, she was the daughter of the late George Benjamin Cushing and Elizabeth Marcella (Leonard) Cushing. Louise lived most of her life in Saint John and the surrounding area until last year when she moved to Ottawa to stay with her daughter and family. She was a homemaker who lovingly raised two children in Rothesay where she resided for more than 50 years. She was a talented quilter and a member of the Kennebecasis Valley Quilting Guild for over 30 years. Louise had a quiet, kind and gentle nature. She was compassionate and accepting, always giving others the benefit of the doubt. Her warmth, love, empathy and kindness will be missed by all who knew her. She was a loving and caring wife, sister, mother and grandmother who will forever be missed by her two children: D. Bruce Scott (Debbie) of Saint John and Linda Louise Khoury (Charles) of Ottawa; grandchildren: Jordan Scott-Walker of Saint John and Madelyn Louise Khoury of Ottawa; sisters: Helen Hunting of California and Delia Cushing of Saint John; a brother Andre Cushing of Toronto; and several nieces and nephews. Aside from her husband and parents, she was also predeceased by her brothers: George, James, and Chauncy. Cremation occurred in Ottawa at an earlier date. A graveside service and interment will occur on Monday, May 7th, at 2:00 PM, in Saint John at Fernhill Cemetery (please meet at the Fernhill Cemetery Office, 200 Westmorland Road for 2:00 PM). A reception will follow at the home of Bruce Scott. Arrangements are under the care and direction of Brenan’s Funeral Home, 111 Paradise Row, Saint John, NB (634-7424). For those who wish, the family would appreciate remembrances made to the Saint John SPCA Animal Rescue or a charity of the donor’s choice.