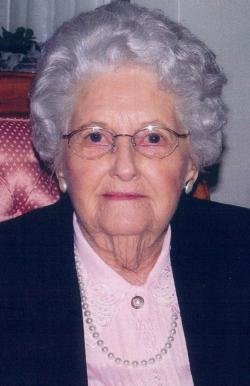 Get Directions
Monday
21
May

Get Directions
Monday
21
May

With gratitude and appreciation for a well lived and accomplished life, the family of G. Marie Jenkins announces her passing, which occurred peacefully on Thursday, May 17, 2018. Born in Jemseg on August 14, 1918 she was the daughter of the late Arnold and Blanche (Robinson) Dykeman. Marie will be missed by her beloved son, Willard M. Jenkins (Nancy McCarthy) of Rothesay; her grandchildren: Daniel D. Jenkins (Laura) of Halifax and Sara A. Jenkins (Simon Theobald) of Ottawa; Her great grandchildren, Sophia A. Jenkins and Hazel M. Jenkins as well as a grandchild soon to be born. She is also survived by her sister-in-law Carol Dykeman; several nieces and cousins; members of Nancy McCarthy's family; and the Mother of her Grandchildren, Nancy Jenkins. In addition to her parents, Marie was predeceased by her husband, Donald Osborne Jenkins; her brother C. Donald Dykeman; and her sister-in-law Patricia M. Jenkins. Marie was a graduate of the Provincial Normal School and the University of New Brunswick having received a Bachelor of Arts Degree and a Bachelor of Education Degree. In 1959 she began teaching at Assiniboine School in Oromocto, NB and in 1967 was appointed Principal, retiring in 1984. She was a life member of the UNB Associated Alumnae and served as Executive Chairperson of the Honorary Degree Committee and Scholarship Fund Committee. She also served as a Member of the UNB Board of Governors. She was a member of the Anglican Church and was active in the A.C.W. in Gagetown, Fredericton and most recently in Rothesay. Resting at Brenan's Funeral Home, 111 Paradise Row, Saint John, NB (634-7424) with visitation on Monday, May 21, 2018 from 2-4 and 6-8 pm. A Funeral service honouring Marie's life will be held on Tuesday, May 22, 2018 at 1:00 pm from St. John's Anglican Church located at 3 Court House, Gagetown, NB Interment will follow at the Church Cemetery. For those who wish, remembrances may be made to the Jenkins Family Scholarship at UNB Fredericton or a charity of the donor's choice. Online condolences may be placed at www.BrenansFH.com. The family would like to thank the Health Professionals at the Saint John Regional Hospital and Shannex in Quispamsis for their excellent care and compassion.

Share Your Memory of
Gertrude
Upload Your Memory View All Memories
Be the first to upload a memory!