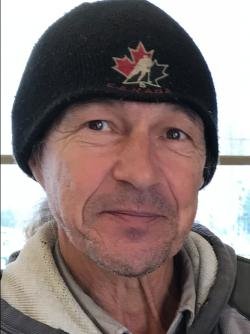 It is with heavy hearts that the family of Bernard Joseph "Barney" Bernatchez announces his passing, which occurred on Monday, May 21, 2018 at the Saint John Regional Hospital. Born on April 26, 1952, in Baie-Comeau, QU, he was a son of the late Ernest and Rosanna (Larocque) Bernatchez. Barney graduated from Millidgeville North in 1973. He went on to work for Irving Paper for 35 years, from which he retired at 55. He lived on Bradley Lake Road for over half of his life. He loved to go camping and taking long rides on his Harley. He could often be found tanning at Tucker Park. Barney was a selfless man, a giver not a taker, and his family always came first. He was a wonderful grandfather to his grandchildren. Barney is survived by his spouse, Diane (Rioux) Bernatchez; daughter Julie Gilbert (Christopher); brother Guy Bernatchez; sister Bernadette Crowley; grandchildren Marissa, Isaac, and Taylor Gilbert, as well as many nieces and nephews. Aside from his parents, he is predeceased by his son, Mark Bernatchez; brothers Roland and Claude Bernatchez; and sister Claudine Bernatchez. The family would like to extend a special thanks to the Saint John Regional Hospital Palliative Care Unit, Dr. Robin Williams, and Dr. Chris O’Brien for their care of Barney during his time at the hospital. Resting at Brenan’s Funeral Home, 111 Paradise Row, Saint John, NB (634-7424). With visitation on Thursday, May 24, 2018 from 2-4 and 7-9 PM. A funeral service will be held from the Brenan’s Chapel on Friday, May 25, 2018 at 12:00 PM. Donations may be made to Outflow Ministries. Online Condolences may be made at www.Brenansfh.com

Share Your Memory of
Bernard
Upload Your Memory View All Memories
Be the first to upload a memory!