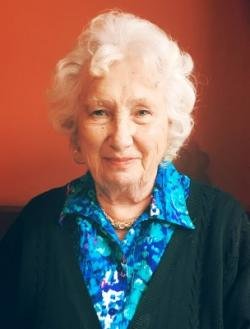 Pamela Grace Barfoot, 91, died peacefully with family at her side in the early morning of May 22, 2018 at the Saint John Regional Hospital. Born in London, England, in 1926, she was the daughter of the late Walter and Marian (Ball) Smith. She was educated at local schools and upon graduation joined the staff of Sun Life Assurance in London. She emigrated to Canada in 1947 with her parents and rejoined the same company in Saint John. After her marriage to Nicholas Barfoot in 1958, she devoted herself to the raising of her family. Mrs. Barfoot was an involved member of Fairfield United Baptist Church and later of Douglas Avenue Christian Church, where she was a Sunday School teacher and dedicated choir member. She loved music and singing; before moving to Canada, she sang with the Christian Endeavour Choir at Albert Hall in London, and in many famous London churches. In recent years, she was an enthusiastic member of the Carleton Choristers. Mrs. Barfoot also served for many years as a volunteer with the North End Food Bank and with the New Brunswick Museum in the Education Department. She was also very creative and accomplished in a variety of crafts. And, perhaps most of all, Mrs. Barfoot loved to travel; she met her husband while on a round-the-world-trip, and together they visited all provinces, all U.S. states, and more than 75 countries around the world. She is survived by three children: Colin (Ruth) of Whitby, Ontario, Gillian (Janet) of Saint John, and Mark (Rachel) of Nepean, Ontario; along with six grandchildren: Christine (Ian), Harrison, Evangeline, Nicholas, Daniel and Victoria; and several nieces and nephews. She was predeceased by her husband Nicholas, a grandson Joshua, and her sisters Edith and Kathleen. A time of visitation will take place from 10:00 - 11:00 AM on Friday, May 25, 2018 and will be immediately followed by the funeral service at 11:00 AM, all from Portland United Church, 50 Newport Crescent, Saint John. A reception will follow the service in the church hall. Interment will take place in Browns Cemetery, Bains Corner. Arrangements are under the care and direction of Brenan’s Funeral Home, 111 Paradise Row, Saint John (634-7424). In lieu of flowers, memorial donations may be made to the North End Food Bank or the mission or church of your choice.

Share Your Memory of
Pamela
Upload Your Memory View All Memories
Be the first to upload a memory!