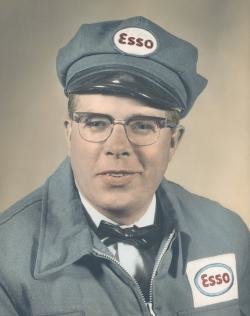 It is with heavy hearts that the family of Arthur Francis Townes, husband of Sylvia Townes, announce his passing on May 30, 2018 at home surrounded by his loving family. Born in Moores Mills (Honeydale), NB on August 10, 1929 he was a son of the late Hazen and Flora (Scott) Townes. Arthur and Sylvia were married in St. Stephen on June 3, 1953 and were 4 days short of their 65 year anniversary. They moved to Saint John in September of that same year and Arthur worked for service stations Pete Farren and Don Buchanan Esso for 21 years. Arthur was a licensed mechanic # 888. In February 1974 he started working for Irving Industrial Security where he worked until his retirement in October 1994. Arthur enjoyed his camp at Andersonville, NB, along with fishing and hunting. He will be missed by all who knew him. Arthur will be lovingly remembered by his wife of 65 years, Sylvia; son, Glen Townes (Shauna Smith); daughters: Valerie Leblanc (David), Angela Tracey (Darrell Telesnicki); 10 grandchildren and 11 great-grandchildren; brothers: Wallace (Pauline), Carson (Hilda) and Hazen Jr (Rosemarie); sisters: Inez Beney, Margaret McLaughlin and Jacqueline Golden, as well as several cousins. In addition to his parents, Arthur was predeceased by his son, Malcolm; daughter, Marilyn and brother, Samuel; brothers-in-law: Charles McLaughlin, David Golden and John McLaughlin. Arrangements are under the care of Brenan’s Funeral Home, 111 Paradise Row, Saint John (634-7424). A funeral service will be held on Monday, June 4, 2018 at 12 noon from Brenan’s Funeral Home Chapel. Interment will follow in Fernhill Cemetery. For those who wish, donations in Arthur’s name may be made to the Heart and Stroke Foundation, the Canadian Cancer Society or Autism Speaks Canada.