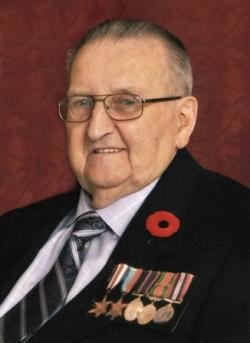 With heavy hearts, the family of Charles "Dina" Williams announce his peaceful passing which occurred at Ridgewood Veterans Wing on Monday, August 27, 2018. He was the son of the late Charles and Ethel of West Saint John. Charlie was a proud WWII veteran. He enjoyed the outdoors, mainly fishing and hunting with his father. He also enjoyed watching sports on TV and travelling with his family. Charlie’s greatest gift in life was his family – he was a loving father to four children, nine grandchildren and eight great-grandchildren. Charlie was predeceased by his six siblings and his pride and joy, beautiful wife of 62 years, Augustine. Special thanks to Drs. Wildish and Grant, the staff at Ridgewood Veterans Wing, Chaplain John and all those who touched Charlie dearly. Arrangements are under the care and direction of Brenan’s Funeral Home, 111 Paradise Row, Saint John (634-7424). Please join his family at St. Augustine’s Church, Grand Bay-Westfield, for a graveside service on Friday, August 31, 2018 at 9:00 AM. In lieu of flowers, the Williams family has requested donations be directed to Ridgewood Veterans Wing. WWW.BrenansFH.com.

Share Your Memory of
Charles
Upload Your Memory View All Memories
Be the first to upload a memory!
Share A Memory