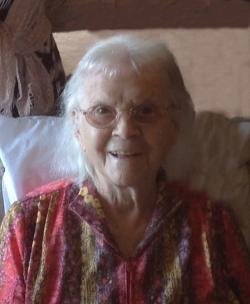 The death of Elsie E. Mosher of Saint John, wife of the late Hazen A. Mosher, occurred on August 31, 2018 at her home. Born on September 13, 1918 in Stanley, New Brunswick, she was the daughter of the late Burgess S. and Mabel (Flynn) Foreman. Elsie worked as a Branch Secretary for Standard Life Assurance for thirty-five years until her retirement in 1974. She was a faithful member of St. John's (Stone) Anglican Church and the ACW. Elsie is survived by several nieces and nephews, as well as many good friends, including Senior Watch staff members: Sharon and Jean and caregivers: Valerie, Marie, Lucy, Elizabeth, Christina, Donna and others who for many years provided excellent companionship and care. The last surviving member of her immediate family, Elsie was predeceased by six brothers and three sisters, as well as her aunt and uncle Edward and Mary (Foreman) Stone, who lovingly raised her after her parents succumbed to the flu epidemic of 1918. Arrangements are under the care and direction of Brenan's Funeral Home, 111 Paradise Row, Saint John, (634-7424). A Memorial Service will be held at Brenan's Chapel on Wednesday, September 5 at 1 pm. A reception will follow. Internment will take place at Fernhill Cemetery. For those who wish, remembrances may be made to St. John's (Stone) Church.

Share Your Memory of
Elsie
Upload Your Memory View All Memories
Be the first to upload a memory!
Share A Memory