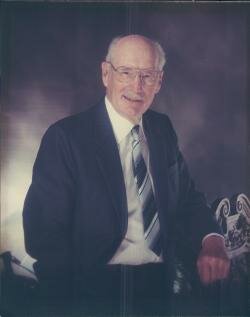 Burial of Ashes in Spring

William passed away peacefully at the Saint John Regional Hospital on December 26, 2017 at the grand age of 103. He was pre-deceased by his wife, Dorothy, of 73 years. Born in Chatham, NB, Bill enjoyed a full and wonderful life with his career and family. Bill graduated from UNB in 1935 with a BScEE but pursued a career in Civil Engineering. He started working for the Town of Chatham as their District Highway Engineer. When WWII broke out, Bill was drafted by the Federal Government for the construction of airports and worked in Pennfield Ridge, NB, Sherwood Naval Base, Dartmouth, NS, Goose Bay and Gander, NL. Later he was put in command of developing water supplies for all the airports in the Eastern Air Command. In 1947, Bill accepted the position of City Engineer for the City of Saint John and later became the Director of Works. In 1954, he joined the Consulting Firm of James F. McLaren Associates Ltd. In 1959, he formed his own Engineering company under the name of Godfrey Associates Ltd. – Consulting Professional Engineers. Bill was a Life Member of: The Water Pollution Control Federation; The Association of Professional Engineers of the Province of New Brunswick; The American Water Works Association; The Engineering Institute of Canada; The New England Water Works Association and The Association of Consulting Engineers of Canada. He was the first Maritimer to be Chairman of the Canadian Section of the American Water Works Association. Bill was an avid golfer and curler. He was President of the Riverside Golf and Country Club in 1962. At the age of 96, he shot a birdie while playing a round of golf in Florida. Bill skipped his rink to win the British Console Trophy and the Likely Trophy representing the St. Andrews Curling Club. Bill was also "Worshipful Master" of Hibernia Lodge #3, Saint John and a member of the Luxor Shrine Oriental Band. William is survived by his two sons: Grant W. (Beverly) Godfrey of Saint John, NB and Douglas R. (Lynne) Godfrey of Banff, AB; three grand-daughters: Andrea (Eric) Flynn of San Diego, CA; Trisha (Peter) Fitzgerald of Saint John, NB and Southorn Godfrey of Toronto; five great-grand children: Cole and Luke Fitzgerald and Ethan, Braden and Camille Flynn. Our sincere gratitude is extended to our wonderful caregivers that gave their devotion and care to Bill through his final years. Arrangements are under the care of Brenan’s Funeral Home, 111 Paradise Row, Saint John, NB (634-7424). A Memorial Service will be held from Brenan’s Funeral Home Chapel on Tuesday, May 15, 2018 at 10:00 am. Private interment to follow at Fernhill Cemetery. Remembrances may be made to the Multiple Sclerosis Society or the charity of the donor’s choice.