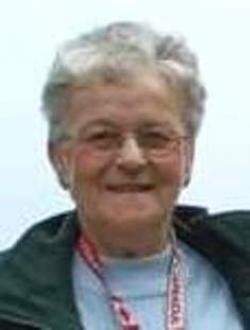 The death of Geraldine McEwen, beloved wife of the late Kenneth Leonard McEwen, occurred peacefully on Friday, February 22, 2019 at Kennebec Manor. Born on December 16, 1930 in Fairville, West Saint John, she was the daughter of the late James Edward and Mary Ellen (Chamberlain) Eagles. Prior to her retirement, Gerry was employed as a food service supervisor at St. Joseph’s Hospital. She always took great comfort in her faith and was involved with several local parishes, including St. Rose, Stella Maris and the Cathedral of the Immaculate Conception. Gerry was an avid reader, a music lover, a lover of roses and always enjoyed a good game of cards. She was well known for gracious hosting and wonderful cooking. Gerry’s wonderful sense of humour and smile will be missed by all who knew her. Gerry will be lovingly remembered by her children, Paul McEwen (Marion) of Rothesay and Mary-Ellen (Phyll) of Truro; daughter-in-law, Patricia McEwen of Saint John; grandchildren, Carrie Ann Nordstrom, Mathew McEwen, David McEwen, Sean McEwen, Carrieann Parker, Kyle Hollingsworth and Ben Hollingsworth; many great-grandchildren; several nieces and nephews. In addition to her parents and husband, she was also predeceased by her sons, Michael McEwen and Daniel McEwen; as well as brothers, Raymond, Louis, Tommy, James and Henry and sisters, Madeline Carvill, Margaret Reardon, Mabel Palmer, Maime McGaghey, Louise Gormley and Linda Corrigan. Mama Bear will especially be missed by her extended family at Maritime Manor, formerly Simmons Special Care Home. Resting at Brenan’s Funeral Home, 111 Paradise Row, Saint John (634-7424) with visiting on Sunday, February 24, 2019 from 2-4 and 6-8 PM. The funeral liturgy will be held from Brenan’s Chapel on Monday, February 25, 2019 at 2:00 PM. Interment will take place at a later date in Holy Cross Cemetery. For those who wish, remembrances may be made to the NB Lung Association or Romero House.

Share Your Memory of
Geraldine
Upload Your Memory View All Memories
Be the first to upload a memory!