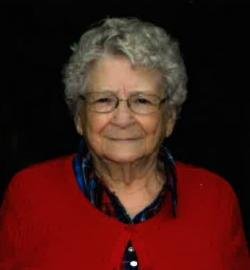 It is with sadness that we announce the passing of Doreen Forward of Saint John, wife of the late Raymond M. Forward, on Friday, February 22, 2019 at the Saint John Regional Hospital. Born on December 27, 1926 in Neath, Wales and raised in Carsonville, Kings County, NB, she was the daughter of the late Garnett and Dorothy (Price) Powell. She was the loving mother of Richard Forward (Heather), Muriel Keeping (Don), Sandra Doyle (Mark), Rachel Lavigne, Gail Case (Glen) and special daughter, Shirley Sawyers. Doreen is also survived by her special friend, Trixie Mootoo; 21 grandchildren; 39 great-grandchildren; 14 great-great-grandchildren; brother-in-law, Art Goddard; as well as several nieces and nephews. In addition to her parents and husband, she was also predeceased by her daughter, Carol Spellman; sons-in-law, Edward Raithby, Bill Keeping, Percy Lavigne and Carl Spellman; brother, George; sisters, Muriel, Elvira McIllwraith, Sheila Goddard and Beryl Smith. Doreen was a foster mother for many years, receiving many letters of thanks and commendation. She enjoyed baking and many will miss her famous rolls and chocolate cake. A special thank you to Rick Wallace and staff of 5CSouth for making her comfortable during the last period of her life. Resting at Brenan’s Funeral Home, 111 Paradise Row, Saint John (634-7424) with visiting on Wednesday, February 27, 2019 from 12:00 - 2:00 PM, which will be immediately followed by the funeral service at 2:00 PM all from Brenan’s Chapel. Interment will take place at a later date in Ocean View Memorial Gardens. For those who wish, remembrances may be made to St. Mary and St. Bartholomew’s Church or a charity of the donor’s choice.

Share Your Memory of
Doreen
Upload Your Memory View All Memories
Be the first to upload a memory!