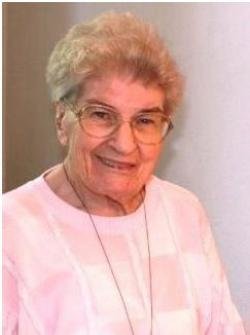 Sister Katherine Mary Savage (Sister Arnolda) died peacefully at her residence on Thursday, February 28, 2019. Katherine Mary,the daughter of the late Herman Savage and Alma (Toner) Savage, was born February 13,1923, in Edmundston, NB. She obtained her Teacher’s License and taught in rural schools in New Brunswick before she entered the Sisters of Charity of the Immaculate Conception on September 8, 1945. Katherine, now Sister M. Arnolda, received her BT and BA from the University of New Brunswick. After her novitiate, she continued her ministry of teaching in Vancouver and St. Patrick’s Orphanage in Prince Albert, Sask. In NB she taught at Tobique, St. Stephen, and at Pius X, St. Peter’s and Holy Trinity in Saint John. Sister Katherine was bilingual and was a french specialist in elementary grades for four years. After she retired from teaching, she continued to be of service to the Sisters at St. Vincent’s Convent by sewing, switchboard duties and later with the Sisters at Ruth Ross Residence. Katherine Mary is survived by her sister Lourdes (Mrs. Bill Murray) and brothers Ivan, Leigh and Robert. She is predeceased by her parents Herman and Alma; sister Doranne and brothers Bernard and Gilman Arrangements are under the care of Brenan's Funeral Home, 111 Paradise Row, Saint John, N.B. (634-7424). Visitation at Ruth Ross Residence (105 Burpee Avenue) on Tuesday, March 5th, 2-4 and 6-8 pm. Vigil in Carmel Chapel at 7pm. A Mass of Christian Burial at Ruth Ross Residence Wednesday, March 6th, 10am. Interment at St. Joseph’s Cemetery in Saint John, NB.

Share Your Memory of
Sister
Upload Your Memory View All Memories
Be the first to upload a memory!