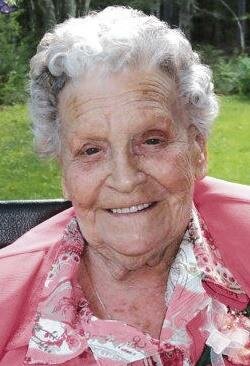 It is with deep sadness that the family of Hilda Florence Campbell announces her passing at Doctor Everett Chalmers Hospital in Fredericton , NB on March 8, 2017. Born Aug. 20, 1921 she was a daughter of the late Millicent (Lee) and Alfred Smith. Hilda was the last surviving member of her immediate family. Hilda was predeceased by her loving husband of 60 years, Earl William Campbell and an infant son, Gary Earl. She was also predeceased by brothers; Lee, Winston and Ernest Smith and sister, Ellen Malato. Hilda will be lovingly remembered by daughters; Dale LaBrash (Roger) of Ottawa, ON and Sherry Hanson (Richard) of Rothesay, NB; grandchildren; Jamie LaBrash, Jared Hanson, Dana LaBrash (Kenya Harper), Keith Hanson, and Kristen Hanson; several nieces and nephews and sister in law, Joyce Bussey. Hilda grew up in Saint John and after her marriage to Earl, lived in Alberta, Manitoba and Ontario. She was very proud of her New Brunswick roots and when she and Earl retired in 1968 they moved from Ottawa to Cambridge Narrows on Washademoak Lake where they felt fortunate to spend many happy years. In recent years Hilda lived contentedly at Pine Grove Nursing Home in Fredericton, where she received excellent care from a devoted and compassionate staff. Their dedication and kindness has been greatly appreciated by the family .Arrangements are under the care and direction of Brenans Funeral Home, 111 Paradise Row, Saint John, NB (634-7424). A service for Hilda will take place at a later date. Remembrances in Hilda’s memory can be made to the Heart and Stroke Foundation of New Brunswick.

Share Your Memory of
Hilda
Upload Your Memory View All Memories
Be the first to upload a memory!
Share A Memory