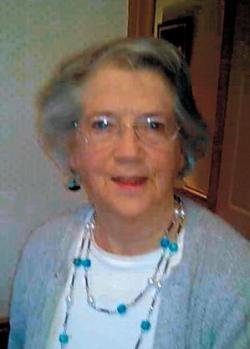 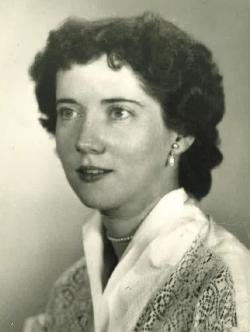 Mary Kathleen "Kay" Alexander (neé Smith), wife of the late Harry Alexander, passed away Friday, March 1st at the Saint John Regional Hospital with her family at her side. She was born on September 20th, 1926 in Saint John to the late James and Ella (Shannon) Smith, the youngest of three children, and their only daughter. Kay first met Harry in Fredericton and they married in Saint John in 1955. They moved to the Saguenay region of Quebec and they had four children over the next five years. As a forester, Harry was often away on forest operations through the week, leaving Mom to keep home and hearth going. The kids often joked about being the first kids on the block to be called in to go to bed on those fine summer nights. We often suspected Mom put the hour hand forward so she could get her well-earned rest - but she always had time for us. They left the Saguenay in1965 and over the next fourteen years the family lived in Bathurst, N.B., Renfrew, O.N., Chandler, P.Q., Nackawic, NB and finally when Harry joined the New Brunswick government in 1979, they moved to Newcastle (Miramichi), N.B.,where they stayed for thirty years. Everywhere the family lived Kay was involved in the community - fundraising for a community pool, leading a Brownie group, canvassing for the CNIB, and volunteering at food banks and Meals on Wheels. Mom always believed in an active and healthy lifestyle, including yoga, whole wheat bread and the fresh air of the outdoors. She kept up with the latest nutritional information and practised the current guidelines on healthy eating. Chips, pop and candy were infrequent in our house, and a cause for celebration when we had them. She learned to ride a bike at forty years old while her sixty-seven year old father cautioned her to drive carefully as he stood watching from the front door. In her fifties and sixties, she learned to cross-country ski and swim. In her seventies she line-danced with the Purple Violets Senior Dance group, and did so until age eighty-three when she moved back to Saint John. Kay was predeceased by her parents, her husband of fifty-five years Harry, her brother Ralph, his wife Noreen, and her brother Harold. She is survived by her sister-in-law Sylvia Smith, her brother-in-law Walter Alexander, her daughters Jane Flanagan (George), Kathy Alexander (Peter Alteen), sons Neil Alexander (Amy), Peter Alexander (Sharon) and beloved grandchildren Laura (Matt Gariepy), Rob (Angela), and Stephen Flanagan, Susan and Clare Alteen, David Alexander, Kelsey and Ryan Alexander, and great-grandchildren Ben Flanagan and Liam Gariepy. Kay is resting at Brenan's Funeral Home, 111 Paradise Row, Saint John ((506) 634-7424), with visitation 2-4 pm Tuesday, March 5th. A Mass of Christian Burial will be celebrated Monday, April 29th at 1:00pm at the Cathedral of the Immaculate Conception. Reception to follow. In lieu of flowers, a donation to the Cathedral Restoration Fund would be much appreciated, or a charity of your choice.