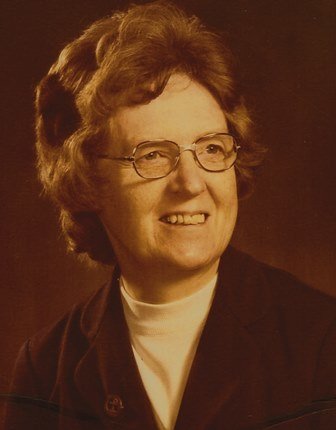 Sister Margaret Veronica McCarthy (Sister Mary Hugh) passed away peacefully at her residence on Tuesday, September 10, 2019.  She was the daughter of the late John Joseph McCarthy and Veronica Winnifred (Armstrong) McCarthy.  She was born in Edmonton, Alberta on December 26, 1923.  After high school, she was engaged in office work in Edmonton.  Margaret entered the Sisters of Charity of the Immaculate Conception on .

Sister Mary Hugh received her NB Teacher’s License and a Bachelor of Education from the University of British Columbia.  She taught at St. Peter’s and St. Thomas Schools and the Orphanage at Silver Falls.  She also taught at Tobique for a year before being missioned to British Columbia in 1952, where she taught in three schools in Vancouver until 1969.   Sister McCarthy returned to Saint John and taught at St. Vincent’s from 1969-1991.

During a sabbatical year Sister Margaret went to Bolivia and helped open a hospital and school in Bolivia with Sr. Thérèse Kergoat.  She also enrolled in a Nursing Assistant Program, after more than 35 years of teaching.  Sister Margaret volunteered at L’Arche community in Wolfville, NS and then moved back west as Parish Assistant in Stewart, BC and homemaker in Prince George, BC.  She also ministered as Parish Assistant in Blackville, NB and in L’Arche ministry in greater Vancouver.  From 2002-2005 she worked at L’Arche in Burnaby, BC,  returning to Saint John in 2005 where she worked as an RNA at Ruth Ross Residence.

Sister Margaret was known for her love of literature and believed that “a room without books is like a body without a soul.” (Cicero)

Besides her parents, Sister Margaret was predeceased by her sisters, Mrs. Joan Bierd and Sister Winnifred McCarthy scic; as well as two brothers, Bernard Daniel and Thomas Eugene.

Visitation at Ruth Ross Residence (105 Burpee Avenue) on Thursday, September 12 from 2-4pm and 6-8pm.  Vigil in Carmel Chapel at 7pm Thursday and Mass of Christian Burial on Friday, September 13, 10am at Carmel Chapel (105 Burpee Avenue).  Interment will take place in St. Joseph’s Cemetery.  Arrangements are under the care and direction of Brenan’s Funeral Home, 111 Paradise Row, Saint John (634-7424).

Share Your Memory of
Sister Margaret
Upload Your Memory View All Memories
Be the first to upload a memory!