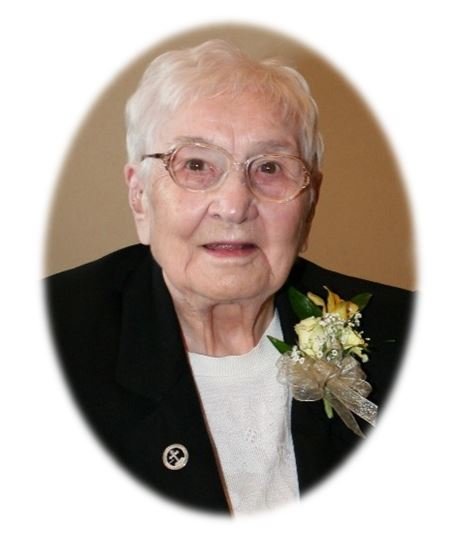 Sister Margaret Mary Martz (Sister Mary Andrew), daughter of the late John Henry and Eleanor (Engel), passed away peacefully at Ruth Ross Residence on Wednesday, November 27, 2019.  She was born in Camrose, Alberta on May 2, 1922.  On January 6, 1942, along with her two sisters, Theresa and Angelina, she entered the Sisters of Charity of the Immaculate Conception.

After Sister Margaret received her NB Teachers’ License, she began her teaching ministry in Woodstock and Moncton, NB.  She moved west to teach in Winnipeg, Manitoba, St. Patrick’s Orphanage, Prince Albert and at Holdfast, Saskatchewan.  Later she taught in Vancouver and at Holy Cross School in Burnaby, BC.

After 35 years of classroom teaching, she returned to Saint John and at St. Peter’s Home was a foster-parent to small children.  She was a parish assistant in religious education at St. Pius X.  Upon completing a pastoral care course in Ottawa, Sister Margaret began her ministry at Rocmaura Nursing Home.

Sister Margaret was known for her compassion and caring, especially with the residents and staff at Rocmaura for many years.  With her sisters, Sister Angelina and Sister Theresa, she followed many of today’s social justice concerns.

She was predeceased by her parents, John and Eleanor; brother, Ronald and two sisters, Sisters Theresa and Angelina, scic.

Visitation on Sunday, December 1 from 2-4 and 6-8 pm at Ruth Ross Residence (105 Burpee Avenue) with Evening Vigil at 7pm.  Mass of Christian Burial will be celebrated on Monday, December 2 at 10 am in Carmel Chapel.  Interment in St. Joseph’s Cemetery, Saint John, NB.

Share Your Memory of
Sister Margaret
Upload Your Memory View All Memories
Be the first to upload a memory!