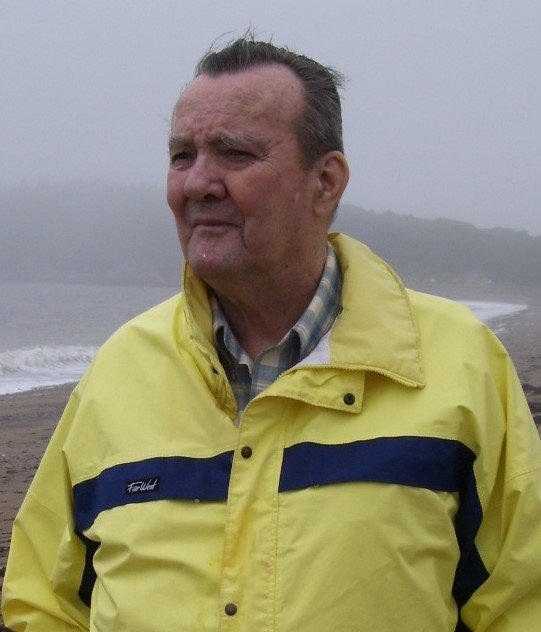 It is with profound sadness that the family of Frank Moore Powell announces his passing on January 6, 2020 in his 88th year. Born in Moncton, NB on July 20, 1931 he was the oldest son of the late John Henry “Harry” and Dorothy Loretta (Moore) Powell.

Frank received his early education in Moncton, NB. He graduated from St. Thomas College, Chatham NB in 1949. While there he attained the rank of Cadet Lieutenant with the Royal Canadian Army Cadets. Frank attended St. Francis Xavier University graduating with a BSc Engineering in 1952. He then travelled to Baffin Island to work as an Assistant Engineer on the Distant Early Warning (DEW) Line, a defensive system of radar stations in the far northern Arctic region of Canada. After holding positions as Draftsman at Matthews Conveyor Co. Ltd., Port Hope, ON and Sales Engineer at E.S. Stephenson & Co. Ltd, Saint John, NB and Halifax, NS, in 1971 Frank started his own company, FMP Enterprises Ltd. He retired in 1998.

Frank was an avid yachtsman and many years were enjoyed with his family cruising the waters of the St. John and Kennebecasis Rivers and the Bay of Fundy, and sailing the coastal waters off Halifax and southeastern Nova Scotia. He had the privilege of serving as guest crew aboard the Bluenose II on voyages from Bermuda to Halifax and Halifax to Lunenburg. In the winter months he liked to cross-country ski. Frank also loved to travel, visiting England, Ireland, Denmark, Norway, Sweden, Finland, Netherlands, Majorca Spain, and many cities within Canada and the USA.

Frank was a home master chef who enjoyed showing off his culinary skills by preparing signature dishes for family and friends. This resulted in luxuriously flavorful dinners of prime rib roast au juc, Yorkshire pudding and Bananas Foster. He was always there to lend help when needed, and left a mark that was understated yet lasting on people who knew him. He was a good neighbour sharing his time, tools and talents and was very social with an easy smile, quick wit and great sense of humor.

Frank’s beautiful mind was robbed in his later years by dementia. He rested in the comfort of his daughters’ home with supportive care before moving to Lily Court at the Parkland Saint John. Frank would have liked to thank all of the staff who attended to him with the utmost patience and compassion. His family is grateful for the wonderful care provided.

The family will receive relatives and friends at Brenan’s Funeral Home, 111 Paradise Row, Saint John, NB (634-7424) on Thursday, January 9, 2020 from 2-4 and 6-8P M. A Funeral Liturgy will be celebrated on Friday, January 10, 2020 at 10:00 AM from Brenan’s Funeral Home Chapel with a reception to follow. A private interment will take place in the family burial plot, Hampton Rural Cemetery, Hampton, NB at a future date.

Flowers are thankfully welcomed. Memorial donations to the Alzheimer Society, Canadian Cancer Society or to a charity of one’s choice are also very meaningful to the family and will have lasting benefit for other families in the future. Online remembrances and condolences may be placed at www.brenansfh.com.