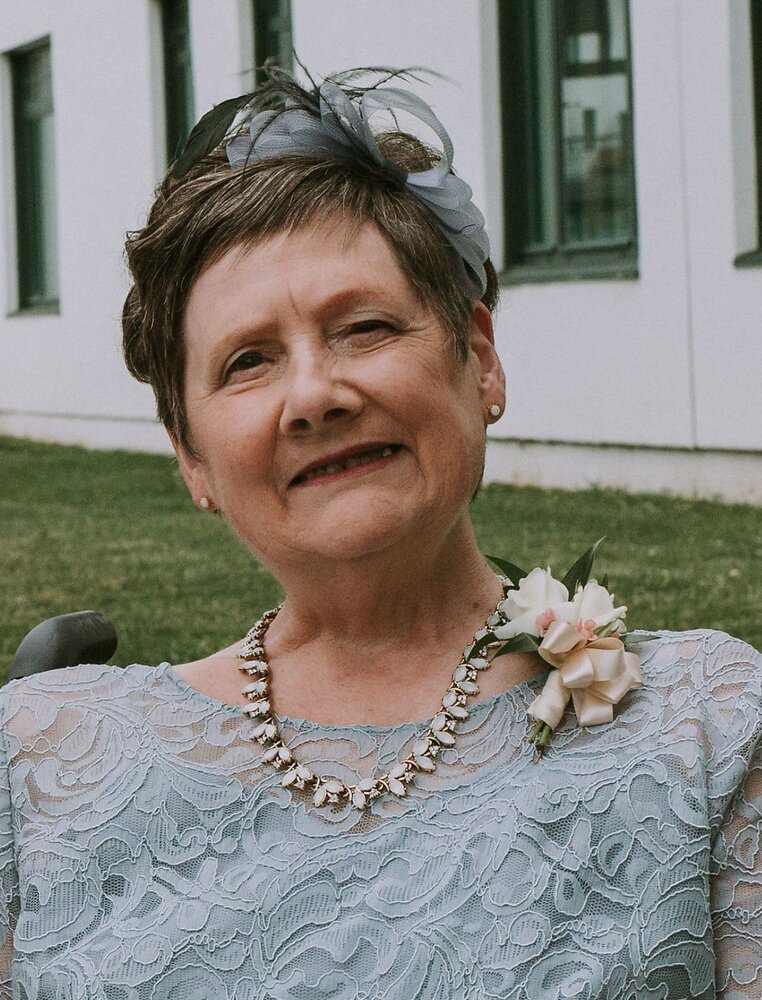 Donna Marie (nee Blinn) Lewell passed away peacefully on December 14th, 2021, at the Saint John Regional Hospital after a lengthy illness, at the age of 72.

Donna was born at the Saint John General Hospital on October 22nd, 1949, the daughter of the late J. Albenie and Jacqueline Blinn. She is predeceased by her eldest sister, Frances Blinn.

Donna is survived by her husband David, of Saint John, her daughter Maryanne (Michael Townes) of Greenville, South Carolina, her son Jeffrey (Stephanie) of Hampton, NB, her sister Gail Comeau (Alfred) of Clare, Nova Scotia, grandchildren Kayla and Nathan Lewell and step-grandchildren Reeve and Annemarie Townes, and finally by her grand-puppy Teddy the miniature dachshund.

She lived her entire life in Saint John, and was a graduate of St Vincent’s High School and Modern Business College. While working for the City of Saint John in the early 1970s she met David, whom she married in 1973. With the births of Maryanne and Jeff, Donna stayed at home. She became involved in volunteer activities to support her children, such as becoming a Girl Guide leader. Donna found great satisfaction and purpose serving on the national board of directors for Canadian Parents for French. While volunteering with CPF she was able to travel and see Canada, memories she held fondly. Returning to the workforce, she was employed by the Saint John YMCA-YWCA and eventually by Investors’ Group as an executive assistant.

Donna was diagnosed with Inclusion Body Myositis in 1998 and retired shortly after. She continued her volunteer work in her retirement with St. Pius X Church, most especially with the Martha Guild.

She often said that in the face of IBM she could only control her own attitude, and she tried to keep a positive outlook on life, choosing to enjoy the little moments.

Donna enjoyed listening to ABBA and to Christmas music no matter what time of year.  She was a great cook (of everything except baked beans), a prolific jam and pickle maker, and a talented baker who at one point taught cake decorating at the municipal craft centre. She was handy with a needle as well, both as a seamstress and as a knitter.  She has attempted to pass these skills along to future generations over the years, keenly supervising proceedings and offering instructions from her chair whilst sipping on a glass of wine or enjoying a little piece of chocolate.

The family is especially grateful to her caregivers, for their assistance in keeping Donna comfortably at home over the course of her long illness. Thank you as well to the office of Dr. Luan Le and to the staff of the Stan Cassidy Centre for their support and assistance over the years.

Due to COVID restrictions, a celebration of Donna’s life will be held at a later date. In lieu of flowers, the family would prefer donations made in Donna’s name to the Muscular Dystrophy Association of Canada, or simply making a kind gesture to unexpectedly brighten someone’s day.

Online remembrances and condolences may be placed at www.BrenansFH.com.

Share Your Memory of
Donna
Upload Your Memory View All Memories
Be the first to upload a memory!
Share A Memory