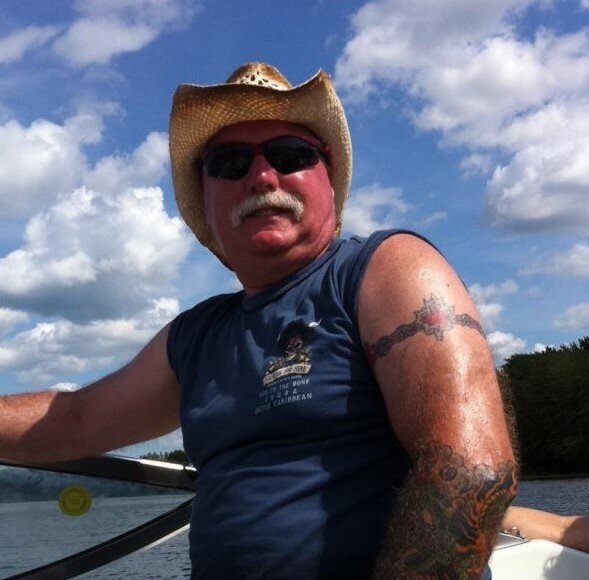 It is with broken hearts that the family of David Arthur Dixon announce his passing on January 8, 2022 at the Saint John Regional Hospital surrounded by his family. Born on January 30, 1955 in Saint John, he was a son of the late James and Mabel (Davidson) Dixon.

Dave loved his family and included them in everything he did. He showed up for everyone and everything. In his early years he enjoyed body building and had a lifelong passion for stock car racing. Little did his parents know what they started by taking him to Hammond River Raceway as a young boy. He enjoyed many aspects of racing over the decades, from pit crew to MASCAR official and created wonderful childhood memories for his children. Later in life, Dave and his family stopped traveling and settled in for summers at Grand Lake where they loved to go boating. Even hunting and going to the Hampton Rifle and Pistol Club eventually became a family event.

Dave led in everything he did but with a soft calloused hand. He was known as the family mechanic and was widely respected in his trade as a Millwright. He started working at a young age with his Grampy Davidson who, along with his father James, taught him a strong work ethic which he passed on to his children. Dave recently returned to the Belleisle to build his new family home. He enjoyed his motorcycle, especially his many trips to Laconia with Al, Andrew and Keith.

Resting at Brenan’s Funeral Home, 111 Paradise Row, Saint John, N.B. (634-7424) with visitation on Wednesday January 12, 2022 from 6 – 8 PM and Thursday January 13, 2022 from 2 – 4 and 6 – 8 PM. A funeral service will be held on Friday January 14, 2022 at 11 AM from St. Mary and St. Bartholomew’s Church, 646 Westmorland Road, Saint John, N.B. Due to Covid-19 health measures placed on indoor gatherings by the Government of New Brunswick, all those 12 and older attending the visitation and service will be required to show proof of vaccination and a piece of government-issued ID or proof of medical exemption. For those unable to attend, the service will be live streamed and can be viewed by visiting the SMSB Church Facebook group or YouTube channel. Interment will take place in the Church of the Ascension Cemetery. For those who wish, and in lieu of flowers, remembrances in Dave’s memory can be made to the N.B. Lung Association or a charity of the donors choice. www.brenansfh.com