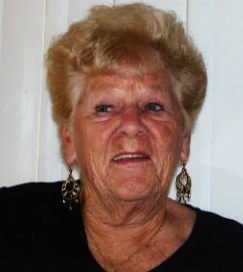 It is with an appreciation for a life well lived that the family of Gloria Hinam of Saint John, wife of the late Les Hinam, announce her passing which occurred on Monday, January 17, 2022 at the Loch Lomond Villa.  Gloria was born in Saint John on January 6, 1933.

Gloria had a long working career with the Bank of Montreal where she retired as an assistant manager.  She was passionate about her golf game and was a member of the Westfield Golf & Country Club.  Gloria also enjoyed her time volunteering with the Royal Canadian Legion Branch #69 where she was a member of the Women’s Auxiliary.  She enjoyed wintering in Lakeland, Florida and always treasured the many lifelong friendships she met there.  Gloria loved to dance and together with her special friend Ron, they were often seen dancing the night away.  She will be greatly missed.

Gloria will be lovingly remembered by her son, Keith Estabrooks (Sandra) of Hampton; grandchildren, Jamie Wood (Monica), Heather Wood (Mark), Alex Estabrooks (Kaitlin) and Alivia Estabrooks (Travis); several great-grandchildren; as well as many nieces and nephews.  In addition to her husband and parents, she was predeceased by her daughter, Debbie; son, Jim; sister, Sandra; brother, Doug and her special friend, Ron McCullum.

A private graveside service will take place at a later date.  Arrangements are under the care and direction of Brenan’s Funeral Home, 111 Paradise Row, Saint John (634-7424).

For those who wish, remembrances may be made to the Canadian Cancer Society.

Share Your Memory of
Gloria
Upload Your Memory View All Memories
Be the first to upload a memory!
Share A Memory