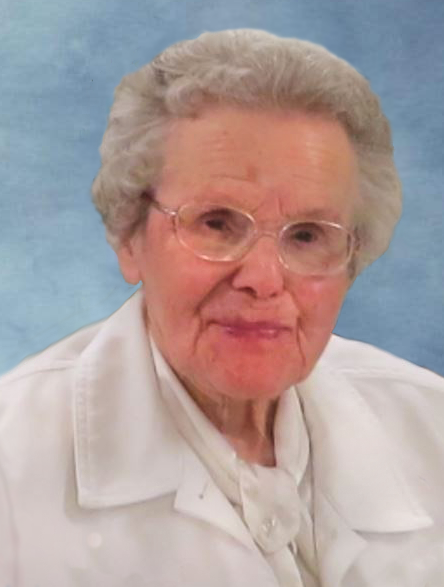 Print
Loading...
M
Marg and Bob Dunbar posted a condolence
So sorry to hear of Sister Therese Aucoin’s passing. Sister was a sweet, caring lady. I remember her coming to our home on Goldsworthy Road my mum loved to chat with her. Sister always had stories to tell would enjoy a cup of tea with my mum sometimes Sister Bardsley would come with her it was always a pleasure to see her. You are in our thoughts and prayers. R.I.P. Sister Aucion . God just received another angel. Marg and Bob Dunbar
Please wait
Share Comment
E
Elizabeth McGahan posted a condolence
Sister Therese Aucoin was a lovely, kind woman. During the summer of 1997 she accompanied Sr Mary Devlin who made weekly visits to our home. My husband had returned from the Regional in early August to spend his last months in familiar surroundings. Sr Aucoin could drive, Sr Devlin could not. We were so touched that Mary Devlin had suggested the weekly Holy Communion visits and had enlisted Sr Aucoin as her driver. We had moved to New Brunswick in 1970 when my husband accepted his first position at UNB Fredericton. Of course, we could never have imagined that either of us would develop a terrifying illness at such a relatively young age. In what had to have been the most difficult time in our lives these two women helped to take the edge off our isolation by making us feel as though we were a part of their lives. They were wonderful and I never forgot it. Sr Devlin was an honorary pall bearer at my husband’s funeral, held during the Christmas season of 1997 … and following that she called me every night thereafter until her own health began to fail in 2012. Sr Devlin was a wonderful woman and a great friend to me. I have never forgotten the lift that her and Sr Aucoin’s visits gave to us. My husband and I thought of Sisters Aucoin and Devlin as true Sisters of Charity… meeting a need quietly and unceremoniously. The congregation is now approaching the end of its institutional road and one wonders who among the laity will take up the task in the future that was shouldered 25 years ago by these women. At this time we in the laity need to be thinking about this, and remembering the women, like Mary Devlin and Therese Aucoin who embraced, and fulfilled, this magnificent dimension of the Lord’s work.
Please wait
Share Comment
M
Marilyn Leland Bennett posted a condolence
Rose, My heartfelt sympathy to you, Rita and Laurie.
Please wait
Share Comment
N
The family of Sister Therese Marie Aucoin uploaded a photo

Please wait
J
Jannette Jarvis posted a condolence
TO SCIC COMMUNITY know your in my thoughts and prayers as you grieve another member of your community. Sister Aucoin held many hands over the years but now we have to hold onto her memories in our hearts forever. You are now free to travel to meet all those who went before you including your SCIC COMMUNITY. REST EASY Sister Aucoin until we meet again. Jannette Jarvis (Associate)
Please wait
Share Comment
J
Joan (Arseneau) Marks posted a condolence
Dear Rose, so very sorry to hear of your sister's death, remember her well, she was such a sweet person and always a smile on her face. She has now earned her eternal reward, well done good and faithful servant, rest in peace. Blessing and prayers during this time. Joanie
Please wait
Share Comment
<< Previous Next >>

Share Your Memory of
Sister Therese
Upload Your Memory View All Memories
Be the first to upload a memory!
Share A Memory