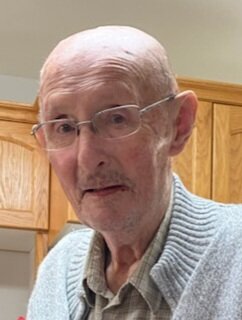 Vicars, James “Grampy” Francis It is with shattered hearts that the family of James Francis Vicars announces his passing on July 9th, 2022, at the Dartmouth General Hospital in his 88th year. Born on May 19th, 1934, in St. John’s, Newfoundland, he was the son of the late Cecil and Susan Vicars.

Family was everything to Jim, so after the passing of Valerie he moved to Cole Harbour to be closer to them. He enjoyed every moment he spent with James, daughter-in-law Anupama, and especially his grandchildren Arabella, Tristan and Aryanna who he constantly said “brightened his life”.

His other passions included the ocean and fishing, whether watching the waves or spending time on the Miramichi. He loved fishing so much he treated himself to a trip of a lifetime to the Arctic. Jim was a man of many talents, one of which was woodworking. He loved building so much that as his grandchildren arrived so did new pieces of furniture. He was also always willing to help anyone who needed it. He enjoyed his dates with Arabella, grabbing an apple fritter from Tim Hortons and driving to watch the waves together in Lawrencetown. He spent many hours “teaching” Tristan to walk as he was the only one Tristan would walk for, and loving watching him grow taller than him. Aryanna was his couch buddy eating cookies while watching the news or helping him with projects.

Jim is survived by his son James (Anupama) Vicars; grandchildren: Arabella, Tristan, and Aryanna Vicars; brothers and sisters; and many nieces and nephews. He is predeceased by his loving wife of 40 years Valerie (nee Thompson), his parents, and many siblings.

Arrangements are under the care and direction of Brenan’s Funeral Home, 111 Paradise Row, Saint John, NB (634-7424). Services for Jim will be announced at a later date. Donations in Jim’s memory can be made to the Canadian Cancer Society, or the Heart and Stroke Foundation. For those who wish, condolences may be made by visiting www.BrenansFH.com

Share Your Memory of
Jim
Upload Your Memory View All Memories
Be the first to upload a memory!
Share A Memory