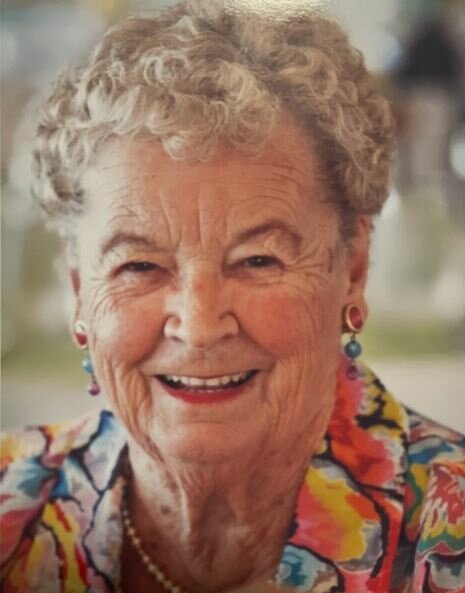 Eileen Mersereau passed away peacefully at Queensway Carleton Hospital in Ottawa, on Friday Oct 29th at the age of 97.

She was predeceased by her loving husband of 51 years, Hilton Mersereau, and her eldest son Peter. She was a terrific mother, friend, and churchwoman. She is survived by son Barry and his wife Debbie, daughter Marilyn and her wife Kristin, and daughter-in-law Claudette. Her many grandchildren include David, Bryan, Michael, Madison, Jackson, Ronda , Robert and 3 great grandchildren.

Eileen was born in Saint John, NB, attended Saint John High School and went on to work at the Bank of Nova Scotia, until the end of WW2. She met her husband to be at a YMCA dance. They wrote back and forth until Hilton was wounded on D Day +1. He ultimately came home, and they were married shortly after. They moved to Ottawa when HB was appointed to a post at Veterans Affairs in 1959.

Eileen was an avid supporter of the Anglican Church of Canada, as a founding member of a new Church built to service growing families in Ottawa, St. Michaels of All Angels, and then a member of Julian of Norwich. She was very active on The Ways and Means Committee and the Altar Guild. Many people were unaware that Eileen was a volunteer for 35 years with Meals on Wheels often spending time with shut-ins, the disabled and those in the process of recovery. She did beautiful traditional rug hooking with a few friends, and was a long-time curler at the RA Centre. This past summer while at Lake Muskoka, she managed to knit 9 pairs of socks for her family.

Eileen very much enjoyed her extended group of friends for the last 22 years at The Meridian Place condos.

Arrangements are under the care of Brenan's Funeral Home, 111 Paradise Row, Saint John (634-7424). A funeral service will be held on Saturday, August 27, 2022, at 1 pm from Brenan's Chapel. Interment will take place in Fernhill Cemetery.

Share Your Memory of
Eileen
Upload Your Memory View All Memories
Be the first to upload a memory!
Share A Memory