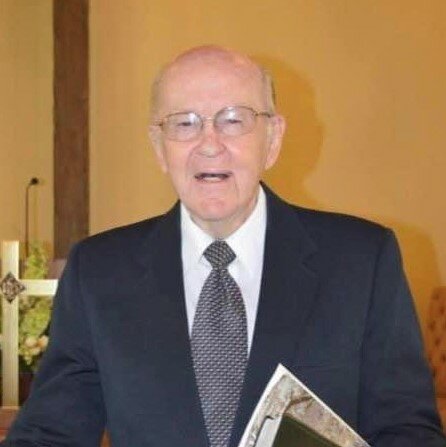 He was preceded in death by his wife of 58 years, Anne Gorveatte; his parents Borden and Helen Gorveatte, and brothers Donald and Douglas Gorveatte.

Ken was born in Spring Hill, Nova Scotia, Canada on November 27, 1935.  His sixty years of ministry have been marked by church growth and revitalization. His preaching brought clarity and conviction that called sinners to repentance and saints to holy living.  Everywhere that he and Anne served together, attendance and giving increased, new believers came to Christ and were baptized. This was true for rural churches in Maine, New Brunswick and Nova Scotia, to city churches in Alabama, Virginia and Indiana. Under his leadership, Presque Isle Wesleyan Church received national recognition as the fastest growing Sunday School in the state of Maine.

Dr. Gorveatte mobilized people to answer God’s call to ministry. Dr. Peter Reid and Rev. Dale McDonald both came as students to Kingswood as a result of his ministry in the Westchester church. Dr. Gorveatte’s two sons, Joel and Mark, serve in Wesleyan church leadership today. Ruth teaches at a Christian school in Georgia and Beth, along with her husband, leads a growing Wesleyan congregation in Michigan. Three of his grandchildren are also ordained ministers in The Wesleyan Church.

Arrangements are under the care and direction of Brenan’s Funeral Home (634-7424). A celebration of life service will be held on Sunday, September 18, 2022 at 4 pm at Beulah Campground in Browns Flat, New Brunswick.  In lieu of flowers, memorial donations may be given to a scholarship fund established at Kingswood University. www.BrenansFH.com.

Share Your Memory of
Ken
Upload Your Memory View All Memories
Be the first to upload a memory!
Share A Memory