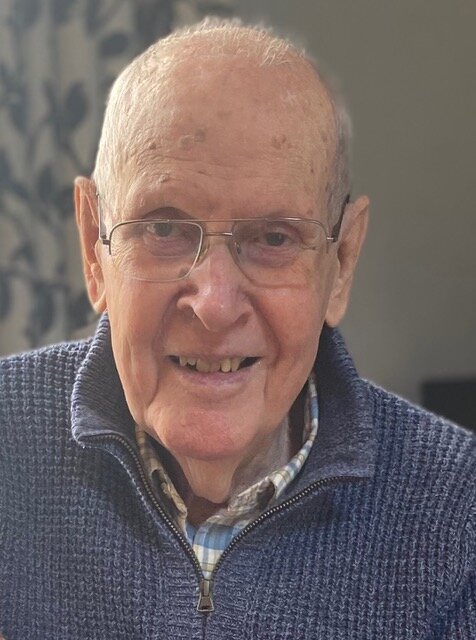 We are sad to share the news of the end of Ronald W. Boyd’s long and well-lived life. Ron passed away on Oct. 6, 2022, after a brief stay at the Palliative Care Unit at Saint John Regional Hospital. Ron was born on March 19, 1927, in Coles Island, NB, the sixth of seven children of Hazen and Hazel (Brown) Boyd.

Growing up on a farm during the Depression and working with his family in the lumber camps during the winter, he learned many different skills and knew the value of hard work, both very useful for his future. After two of his brothers and his father died over a span of 18 months in 1943-44, he moved to Sussex with his mother and younger sister and in 1946 started a job with NB Tel, initially working in the field installing telephone poles and splicing cable. This job took him all over the province, and when boarding in Fredericton in 1948 he met Martha Johnston, who became his wife on November 5, 1949. The couple eventually settled in Saint John, where their two children, Rebecca and Malcolm, were born. In 1959 Ron started a new job in the Outside Plant Engineering department at NB Tel. Despite his limited formal education, he excelled at this work and retired from the Exchange Lines Planning Engineering Department at NB Tel in 1982, where his final office was on the 19th floor of Brunswick Square. After retirement, Ron and Martha moved to their cottage on the Washademoak Lake in Cambridge- Narrows that Ron had expanded and winterized (he could do anything!). He continued to live there until two years after Martha’s passing in 2010, and then moved to an apartment in Fredericton. In 2019, after a 37-year absence, he returned to Saint John to live at Parkland in Millidgeville to be nearer his family.

Ron was a wonderful, loving husband, father, Grampy, and Great Grampy. He delighted in his grandchildren and great-granddaughter and tried to be there for as many of their important milestones as possible. He imparted important values to his children, supported them in all their endeavors, and made sure they would have the opportunities and education he was unable to obtain. He also gave his family the gift of travel. Starting with a tent in 1960, and
upgraded to various trailers over the years, the family camped throughout the Maritimes and northern New England, and then further afield, including trips to Expo 67 and across Canada and back through the US, often visiting extended family along the way. After their children left home for university, Ron and Martha took up square dancing and enjoyed many years dancing with friends in Saint John, Cambridge-Narrows and beyond. This also gave them a reason to travel to new places and they drove all over Canada and the US, visiting all but 2 of the lower 48 US states and all provinces except Newfoundland, which Ron would later visit with his son, Malcolm. For a number of years, they were “Snowbirds”, spending the winters first in Hemet, CA and then in Avon Park, FL.

This humble, kind, gentle, and generous man with a wonderful sense of humour was deeply loved and will be greatly missed. We were so blessed to have him in our lives for so long with a mind as sharp as ever. The family is grateful to the staff and residents of Parkland Saint John for filling the last few years of his life with friendship and fun. The family would also like to thank Dr. Emily Love and the compassionate, caring nurses of the Palliative Care Unit of Saint John Regional Hospital for making Ron’s final journey peaceful. At Ron’s request, there will be no visitation or funeral. A graveside committal service will take place at a date yet to be determined. For those who wish to honour Ron’s memory, a donation to the Saint John Regional Hospital Foundation or to the Canadian Red Cross would be appreciated.

Arrangements entrusted to Brenan's Funeral Home (634-7424). Online condolences may be placed at www.BrenansFH.com.

Share Your Memory of
Ronald
Upload Your Memory View All Memories
Be the first to upload a memory!
Share A Memory