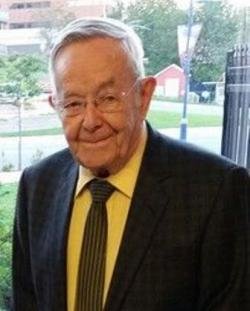 MacKenzie, Reginald LeRoy- After a brief period of failing health, Reginald L. MacKenzie, loving husband of Jeanne Beaumont (Murray) MacKenzie passed away Saturday, May 5th at home. Born May 27, 1923 in Moncton, N.B. he was the eldest son of the late Mr. LeRoy MacKenzie and Mrs. Bella (Hunter) MacKenzie. Shortly after graduating from Moncton High School Reg joined the Cdn. Armed Forces and served in Saint John, Fredericton and Sussex during the Second World War. Following his discharge he attended Mount Allison and Dalhousie Universities, graduating with a B. Comm, became a C.A. and practised in Moncton and Saint John. He moved to Toronto Ont. To further his experience returning two years later to Saint John where he managed the Brookville Manufacturing Co. until it was sold. In his later career years, Reg very much enjoyed teaching accounting at the University of N.B., Saint John campus, where he remained until his retirement. Always an avid fisherman, Reg was a life member of the Chisolm Lake Fishing Club. He spent many happy hours over many years on Dicks and Chisolm Lakes with friends and family. He was an active member of the Church of St. Andrew & St. David, holding various offices within the church and was an Elder at the time of his passing. He was also involved in a number of boards and charities throughout the years, including Family Services and the Christmas Exchange. Along with his wife Jeanne, he is survived and will be greatly missed by one son, Neil (Tanya), one daughter, Carolyn Whitenect (Roger), both of Saint John, three brothers Laurie (Betts) of Sault Ste. Marie, Ken (Florence), Charlottetown and Gerry of Winnipeg, grand and great grandchildren. Besides his parents, he was predeceased by his sister Norma MacKinnon. Resting at Brenan’s Funeral Home, 111 Paradise Row, Saint John, NB (634-7424), with visitation on Wednesday, May 9, 2018 from 2:00-4:00 P.M. and 6:00-8:00 P.M.; the funeral service will be held from the Church of St. Andrew & St. David, 164 Germain Street, on Thursday, May 10, 2018 at 1:00 P.M. Interment will follow at Fernhill Cemetery.In remembrance of Reg, the family invites those who wish to donate to a charity of their choice. The family would like to extend sincerest thanks to the staff of Chateau de Champlain, Joan's Home Support Care and Extra Mural Staff for the remarkable care they have provided during this difficult time. www.brenansfh.com

Share Your Memory of
Reginald
Upload Your Memory View All Memories
Be the first to upload a memory!